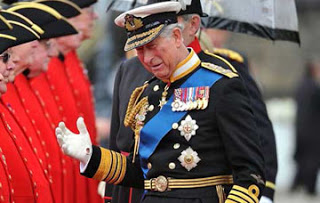 He’s Admiral of the Fleet, a Field Marshal and Marshal of the Royal Air Force. Lest anyone doubt him, he’s also a genius. Just ask him. Don’t take my word for it.
However, without the benefit of the circumstances of his birth, would he be able to hold the position of bar steward in a knocking shop? I have my doubts that he has the stamina to pull pints all night. One knows that to be a proper barman, he’d have to come up with a joke or a wry saying from time to time. I doubt that he could do that either – and since he spends from the Queen’s pot, could he ever learn to make change? Still the close set eyes, the weak chin and the dim bulb of personality mean that maybe he could sweep up at the knocking shop?
During his two-year active service period with the Royal Navy, the Prince of Wales commanded HMS Bronington, a Ton Class Minsweeper launched in 1953. It’s not much of a command as naval vessels go, but you’d expect that the experience of command would have endeared the Prince to his old ship, whose fate he was master of in 1976.
After being decommissioned from service, the ship was purchased in January 1989 by the Bronington Trust, owned by the Prince. On 17 March 2016, she sank at her moorings, and was subsequently scrapped. The Admiral of the Fleet was not known to shed much of a tear about the ship — anymore than he cared about Diana Spencer, his wife and his better in every possible measurable way.

Did the Royals have Diana killed? I don’t think that they did a Hillary, but you never really know. They certainly had motive and opportunity. 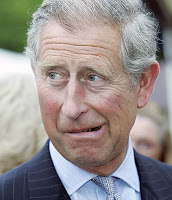 The British public doesn’t think much of Charlie. There’d been talk that his son, William, would take the crown when mom died. However, hubris being what it is, he now really wants to be king because he wants to ‘shake things up a bit’.  The retarded cousin becomes king — it’s too much like the Obama Presidency for comfort.
It’s tough to take it all seriously when the Field Marshall has never made his own bed, or managed to whip up beans-on-toast for his supper.