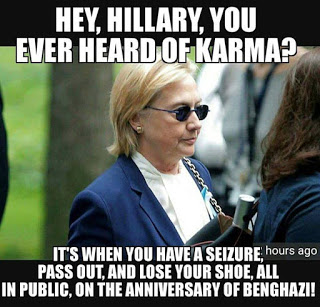 A second video from a different perspective also surfaced. I’m not a doctor, but if you have pneumonia, you don’t seize and an hour later, emerge from your daughter’s apartment, smiling, waving and kissing a little girl. That’s simply not how it works.
We (in the blogosphere) have watched Hillary’s physical condition deteriorate and have commented on it. The mainstream media knows about it but tried to shield the Clinton machine.
I’m intensely interested to see whether or not the polls numbers move now that it’s confirmed that she is physically unfit to be president.  Will a Clinton insider come forward with the promise of a “book deal” or will the threat of murder be too great for them?  We know that eventually it will all wash in public, but the Clinton devotees really don’t care whether or not she has fits. She’s a prog and a woman and that’s enough for them. 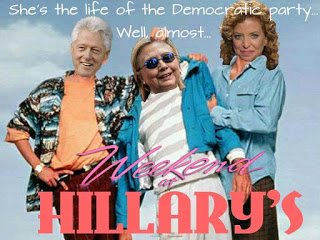 If Hillary croaks in office, we’d be stuck with Tim Kaine. Which is a lot like having Joe (Slow Joe) Biden as president. At least Barack could walk a golf course, and had the strength at the end of his round of golf to mount a catamite or whatever he did.
A Hillary zombie might be the answer (meme left). Weekend at Bernies is an old movie, but Hillary’s spastic walk to the van does remind me of that. Have the DNC engage a witchdoctor to make a zombie out of her and the flying monkeys can keep her upright.