What about the Russians? 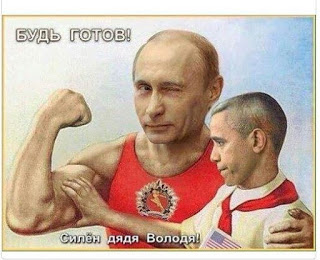 Hillary Clinton initiated a “reset with Russia” when she was Secretary of State. Today she excoriates Donald Trump for suggesting that the US could cooperate with Russia against ISIL, a common enemy. The press doesn’t point that out. They simply cluck their tongues at Trump, who doesn’t know how things work.

The Russian people understand strength and they also understand terrorism. Unfortunately they grasp the point that defeating terrorism requires that people are killed and that making common cause with them as Barack has done, will never work.
The picture (above right) graphically illustrates how the Russian people perceive Barack Hussin Obama. The picture should hang in the Barack Obama Presidential Library and memorial, but I doubt that it will, unless of course, I am made curator…
In order to get along with Russians, you need to understand them. The reverse is true as well. I’ve never had a problem understanding them or getting along with them, but it took some study to shed the preconceived notions that I had. Russians don’t want to be anyone’s ‘bitch’. Russians are also racist in the extreme, which bothers progs, but I get it.  Barack’s mulatto heritage bother’s them.
Some time in the mid-1990’s I attended an intelligence briefing, where the briefer laid out facts from a DOD playbook which were patently false. He predicted an imminent nuclear attack by Russia against the USA. I remember speaking to colleagues during a break where we all said, “What a load of crap.”

I’m not suggesting that Putin is not formidable. I’m not suggesting that they don’t have the balls to launch. I’m not suggesting that Russians are not capable of enduring almost unthinkable hardships and rising above them. We saw that in the Great Patriotic War/World War 2. I am suggesting that it might be useful to walk in the Russian’s shoes for a moment. They find that Ukraine membership in NATO is unacceptable in much the same way as we would think that Canada joining the Warsaw Pact would be unacceptable, or nuclear missiles in Cuba would be. Russia will ALWAYS be a player on its doorstep because it’s Russia, it’s nine time-zones long and because it’s the big dog.
It’s much better to show strength (which the Russians respect) where it is appropriate, and a modicum of understanding is useful when we’re formulating national policy.

(Wikipedia) To the Struggle Against World Terrorism (also known as the Tear of Grief and the Tear Drop Memorial) (below) is a 10–story sculpture by Zurab Tsereteli that was given to the United States as an official gift of the Russian government as a memorial to the victims of the September 11 attacks and the 1993 World Trade Center bombing. 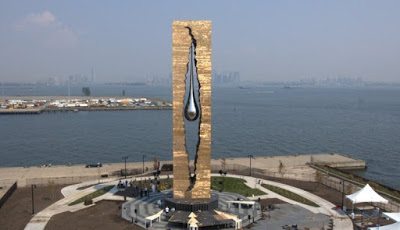 The only American policy that I can recall during the Obama Years, was joining with the world to change the weather. The Russians think that’s bullshit.