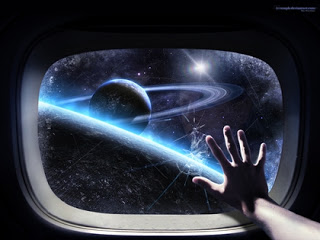 The note, written in plain text and sealed in thick plasticine, had been affixed to the descent shuttle’s command pilot’s chair. The shuttle’s rescue beacon had been operating for at least the half-life of radium-226.

There is evolution and there is devolution. Sometimes they happen at the same time. Sometimes not. After the passing of 1600 years, as E-Standard is measured, it’s difficult to know what one may find.

To whom ever finds this: The Expedition Class ship, Argonaut, reported a malfunction while orbiting B. Fornacis 1.2, the moon of a gas giant in orbit around Beta Fornacis. No further contact was made. The Imperium sent the Exploration class ship, Bounty, to determine the fate of the ship and crew, arriving 230 E-Standard years later. I am the only survivor of that ill fated rescue and survey attempt. Survivors of the Argonaut are present on B. Fornacis 1.2. I will set out to make contact with them.  – Brentin Amsharj Norshire, Lieutenant, Asst. Propulsion Systems Officer, ESS Bounty

Everything one would want to live a happy life could be found on the moon they called Anthem. Liquid water oceans, comfortable gravity, and a bulk super rotating atmosphere that homogenized the weather on both sides of the globe even though it was tidally locked to the gas giant, Moraine, dominating the sky overhead. (In the same way that Earth’s Moon always faces the mother planet without rotating)

Expedition and Exploration class ships carried seeds, embryos and the means necessary to create a new world, by displacing indigenous life. They had the neutron warheads to detonate around the new-world, killing all higher life so that upon landing it could all be theirs for the taking. The natural mission of all living beings is to give birth to young and insure survival of the species. That basic law to be fruitful, to multiply and replenish the galaxy is something that all living things have in common.

After so much time had passed, there was no residual radiation to suggest that they’d used the warheads, however it had been standard operating procedure in their era. Warhead use could be assumed because of what I found. The plants and lower order animal life on Anthem had all originated from Earth and seemed to thrive on their new home. Some things were out of balance, the Kudzu vines had gone berserk in places, climbing here and there.

Conditions changed on Earth, our mutual home planet as well, as evidenced by the different nature of the form that we had taken. Genetic manipulation made life possible in the vacuum of space without a ship, though we did travel on larger vessels. Our skin, our form, our being had been transformed from a frail shell, you would identify as human to an exoskeleton, more suited to the environment of space. There had been fits and starts at first at the decisions made to transform the space-faring. Some resistance arose, and was just as quickly silenced as we, the  new generation Earthers, stretched forth and became the dominant life form throughout the explored galaxy. However we’d never forgotten our roots. Many of us kept the avocations that built us – that of farmers, breeders and ranchers. Though we changed, the need for sustenance required that we go back to our roots and pay attention to the basics.

As I moved out onto the landscape, I noticed crops in the fields, well laid out.  The individual family farm or homestead formed the backbone of society on Anthem. Naturally even though they had been rediscovered by their Mother planet with my arrival, we would encourage them to thrive. That encouragement to strive for excellence in food production forms the core of this story. Overhead surveillance confirmed a population of somewhere over half a million people, spread out loosely over two continents. Technology remained somewhere in the iron age, which made sense. With bountiful harvests, ample space and no natural predators, a pastoral life took hold.

In order not to frighten the people living on Anthem, I moved at night. Those people who I contacted needed to be injected with a chemical memory-wipe so that they did not recall my passing. At the same time, I saw to their medical needs by inserting an embryo into each person I encountered in a program that we on Earth call ‘Planned Parenthood’.

People have an inborn fear of spiders, and the appearance of a twelve-foot tall spider with an exoskeleton made of naturally occurring carbon fiber, augmented with weapons and armor would not have been welcomed by the people of Anthem. If I am to be candid, I don’t think that they would have kept that rescue beacon going for sixteen hundred years if they knew that it would have brought me from the old country. You see, my young need to be gestated inside a human host. It doesn’t hurt the host at first but as the entrails are devoured from the inside out, it can become very painful toward the end. Once born, my young instinctively care for their humans, insuring that they remain healthy and eat well. It’s important to our survival that they prosper, reproduce after their own kind, and provide a pool for our use for many thousands of years. We always allow some to mature to a ripe old age as servants and beloved pets.