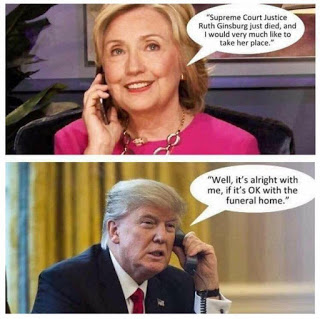 
On Transgenders in the military:
“Nobody has a ‘right’ to serve in the Military. Nobody. What makes people think the Military is an equal opportunity employer? Very far from it.
The Military uses prejudice regularly and consistently to deny citizens from joining for being too old or too young, too fat or too skinny, too tall or too short. Citizens are denied for having flat feet, or for missing or additional fingers. Poor eyesight will disqualify you, as well as bad teeth. Malnourished? Drug addiction? Bad back? Criminal history? Low IQ? Anxiety? Phobias? Hearing damage? Six arms? Hear voices in your head? Self-identify as a Unicorn? Need a special access ramp for your wheelchair? Can’t run the required course in the required time? Can’t do the required number of pushups? Not really a “morning person” and refuse to get out of bed before noon? All can be reasons for denial.
The Military has one job. War. Anything else is a distraction and a liability. Did someone just scream “That isn’t Fair”? War is VERY unfair, there are no exceptions made for being special or challenged or socially wonderful. YOU change yourself to meet Military standards.. Not the other way around. I say again: You don’t change the Military… you must change yourself. The Military doesn’t need to accommodate anyone with special issues. The Military needs to Win Wars.
If any of your personal issues are a liability that detract from readiness or lethality… Thank you for applying and good luck in future endeavors.
Who’s next in line?”

It started out by being an unabashed fan of Teenage Mutant Ninja Turtles, and now my grandson (right) is working his way though his white belt. 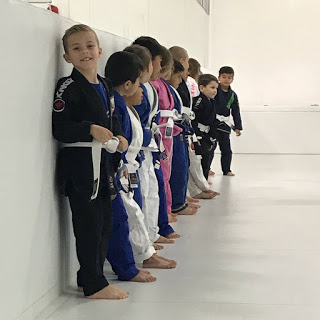 Belt color is clearly not the test of greatness in martial arts.
There are two types of martial art studies. The first is by far the most common where the art and the pulled punches are practiced, affording dexterity, discipline, fitness and fun. If you work at it long enough, you might derive some benefit in a fight, but more likely you’ll just get whipped worse by somebody who is not impressed by your pulled punch or ineffective kicks. (you should have run away but ninjutsu teaches you to stand your ground)
The second is the ‘hard style’ techniques found in most varieties where punches are not pulled the object is not defense, but striking your opponent first, crippling and killing and winning is the prize. It’s not something that I recommend, but many military art forms (Russian style, Krav Maga, Shoto(kan), Tai Kwan Do [hard style]) push the more aggressive side of the discipline.
The young ninja in the photo is just learning enough technique so that he can drop his older brother and teach the bigger boy some respect (and possibly humility). We’ll see where it goes from there.
In San Francisco 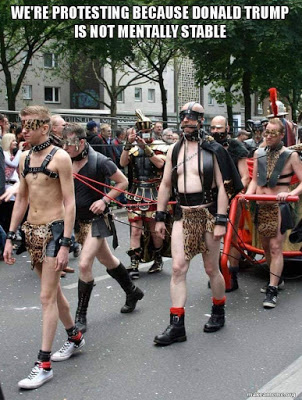 Anti-Trump activists are marching and joining the womyn’s vagina movement with their mangina movement to oppose the President and all he stands for. Their primary complaint is that the President is unfit to lead because he is mentally unstable.

It’s difficult to do much besides showing the photo of them (left) and let that speak for itself.

I would have thought that the entire San Francisco FBI Resident Agency would be marching — ok, maybe they are… right there in the photo, wearing masks to disguise themselves. If you reflect on it, the photo makes a perfect recruiting poster for the FBI. It’s incredibly progressive. The poster makes you want to run out and ask the agents how they like their federal jobs – opposing the MAGA movement.

Rep. Nancy Pelosi (D-CA), one of the wealthiest people in the US Congress, represents San Francisco. Senator Dianne Feinstein (D-CA) used to be the mayor of San Francisco. That should explain a great deal.

And more to the point (see right), California is trying to pass a law that would allow illegal aliens to vote, thus insuring the Democrat super majority. 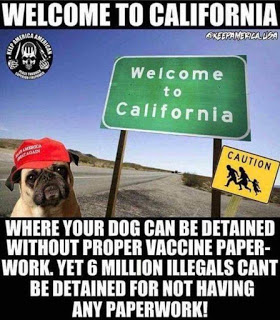