Only Because it’s Tuesday 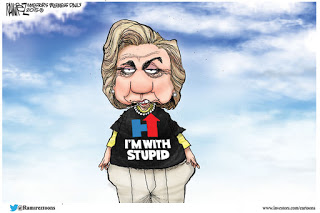 “There is nothing more painful to me at this stage in my life than to walk down the street and hear footsteps… then turn around and see somebody white and feel relieved.” — Rev. Jesse Jackson

I wonder what it must feel like for somebody as rich and powerful as Hillary Clinton to be bested by an old political has-been communist like Bernie Sanders? With her army of advisors, with former Pres. Bill, with more lawyers than a Wall Street brokerage around her, she still comes off like a shrill, dishonest, narcissist.
And it may be worse than that. Even though I don’t think that she’ll see the inside of a jail cell, the mounting evidence around her and the cronies who are fleeing her side (as the parasites drop from the host) make for kabuki theater of the highest order.


The public calls for a Joe Biden run must be especially galling, since The Bitch of Benghazi considers herself the only Democrat fit to be Leader of the Free World. And we all know that it’s just a matter of time before she’s indicted as the result of the FBI investigation and Obama pushes for his cat’s paw, Old Slow Joe to usher in Barack’s third term as president.
More Kabuki Theater 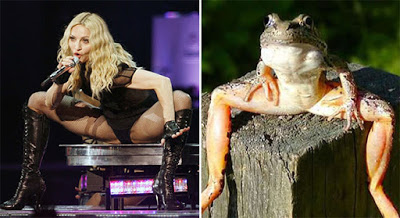 Madonna is transforming herself into a frog. She is said to be heavy into witchcraft and this may explain it. The fifty-eight year old former singer has lost her singing voice (ribit) and she’s going on tour again. I’m sure that it will be a lipsync to an earlier tune from an earlier time. Does sorcery and necromancy work? You be the judge. 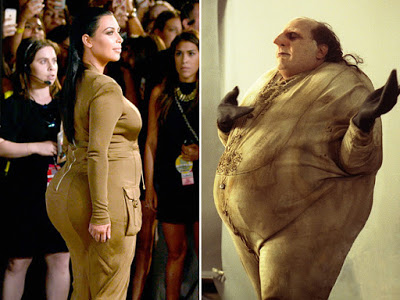 Kim Kardashian is trying to make herself into a human penguin. Or so it’s rumored. Who knows with that family? The large rear lends itself to a penguin style waddle (in much the same way as Hillary Clinton does) Anything for ratings. If the penguin transformation doesn’t go as planned, Kim can always become a guy for the sake of a quick buck and — reality show ratings.