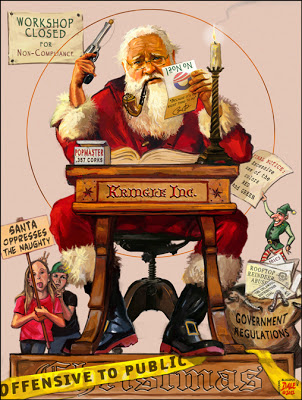 Facebook
Twitter
Pinterest
WhatsApp
I’ve been reflecting on what Dale published in his blog (LINK) and I responded, setting out a partial list of things that are wrong with Christmas (or is it Xmas?) that I am bursting to share with you this joyous PROGRESSIVE Winter Solstice Season.
(a) It’s simply offensive to PETA to see reindeer relegated to a servile position.
(b) The holiday tree – is a symbol of American destruction of the environment and is possible a cause of climate change. It needs to go. Axial tilt IS the reason for the Season.
(c) Santa is obese, and you know how Michelle Obama (she of the exceptionally wide ass) feels about that! Those that wish to honor Santa in their own way should leave a stick of celery, not a cookie, and a glass of tepid tap water, not hot coca.
(d) Santa is also white, and that demeans people of color/colored people everywhere. The symbol of a rich elderly white man is a thing of the past — now being remedied through a combination of taxation and ObamaCare death panels.
(e) Democrats are personally threatened by Santa’s refusal to treat spoiled children equally. We’re ALL winners aren’t we – despite our conduct??
(f) There has never been a discussion of an elves’ labor union. Since the North Pole is obviously a right to work zone, it needs to be boycotted. There should be a picket line around each shopping mall where Santa appears and around every church party in America. How can we have embraced this enslavement of Little People for so long? Somebody needs to make a phone call to the Little People’s Rights Organization. This has been compounded by the insensitivity of Hollywood in releasing “The Hobbit” at this time of year.
(g) Where is the discussion of Kwanza and its place in our national tradition (forget that it was started by Maulana Karenga a professor in California, in the mid 1960’s)? And where is our celebration of the Druids – now extinct for the most part – who found joy in the Winter Solstice and danced naked under the moon. The idea of a naked Santa holding a Kwanza candle dancing under the winter moon is disturbing…
(h) And didn’t the Romans deal with Christ in their own unique way? Why are we bringing that up again? It’s time to pound a few more nails in that old rugged cross and move on…
(i) I reject the mention of the world “Holiday” because it is simply a derivation of “Holy Day” (note to Rhode Island Governor Lincoln Chaffee – it the state tree should be called a SEASONAL TREE – not a Holiday Tree). You’ll note that Governor Chaffee caved to the Jewish lobby and put a menorah next to the (was Holiday – is Seasonal) tree in celebration of Chanukah, a religious holiday. Aren’t we separating ourselves from religion in Rhode Island, Governor Chaffee?
And if you found yourself agreeing with ANY part of what I wrote, you too have joined our nation of whining, screwed up boobs. I’m disgusted with what we have become as a society of pandering fools to every stupid, transitory notion of faux political correctness.
Merry Christmas