On the eve of the BREXIT Referendum 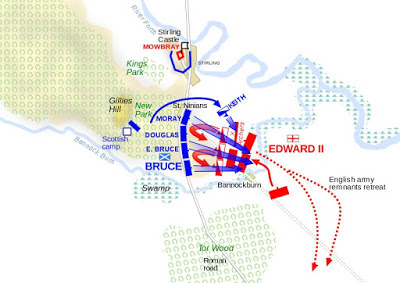 Facebook
Twitter
Pinterest
WhatsApp
The date is propitious for the British vote regarding staying in the European Union or breaking from them and going it alone. It’s time to look back 700 years before we know the result of the voting, particularly since Scotland is known to generally support remaining in the EU.

As requested by blogger, Juliette, a subject of the Crown…my pre-results commentary, with a twist.

Today is the 700th Anniversary of the Battle of Bannockburn.
Scotland had been dominated by England since conquered by Edward I (“Longshanks”) in 1296; despite winning a victory at Stirling Bridge by William Wallace. However, Falkirk the following year (1298) had restored English authority; and Wallace had been captured and executed in 1305.
In 1306, Robert the Bruce claimed the throne of Scotland, and a guerrilla war was begun. This went on for many years, the Bruce’s forces besieging isolated English garrisons and harassing the lands of their supporters. In 1314 Edward Bruce (his brother) laid siege to Stirling Castle, which warded the key eastern route into the Highlands.

The English king, Edward II (son of Longshanks) responded by raising a large army and marching to the castles relief. The English forces numbered some 2,000 cavalry; many of which were armored men-at-arms, the elite troops of the age; and 15,000 infantry, of which many were English or Welsh longbowmen; the battle-winner at Falkirk. Edward was little respected by his lords, and many of the greatest refused his summons. Those that followed his standard were members of the lesser nobility. Throughout the coming battle Edward exercised only a loose control of his forces.
Bruce drew-up his army of some 5-7,000 men south of Sterling, behind the marshy creek known as Bannockburn; a tributary of the River Forth. The Scots were mostly infantry (only about 500 being cavalry, and few of those as heavily armored as the English Chivalry); armed with pikes, axes, and swords. They deployed in their traditional schiltrons, circular hedge-hog formations pikes supported by axes.
The first day of battle the English made two attempts to charge the Scots with little preparation; the English lords showing little discipline or patience. In the first of these assaults, a celebrated single combat took place between when Henry de Bohun, nephew of the Earl of Hereford called-out and charged Robert the Bruce. No match for the English knight lance-to-lance, the Bruce came armed with only a battle axe. Robert waited, and when the charging de Bohan’s lance point glanced off the Bruce’s shield, Robert hacked at the back of the Englishman’s head as he careened past; caving in his helmet and splitting his skull.
The second day, a deserter from the English forces informed the Bruce that the English were demoralized and that their king exercised scant authority. The English were allowed to cross the Bannockburn and deploy with their backs against the creek. The ground was too narrow for their numbers, and the English found themselves crowded into the narrow space. They were also drawn-up too close to the waiting Scots.
As the English and Welsh longbowmen advanced to prepare to fire upon the tight-packed schiltrons (devastating at Falkirk), they were immediately charged by the small force of Scottish cavalry and driven off. The cavalry was followed by a general attack by the Scots all along the line, into the crowded English. The pikemen were able to drive in both the English cavalry and infantry; and at close-quarters the Scottish axes and swords reaped a bloody harvest. Edward fled the field, and his army collapsed in rout.
Though Edward escaped, most of his army perished in the resulting pursuit; and those who attempted to cross the Lowlands back to the English border were harried by the local populace; few surviving.
Scotland was free of English occupation, and would carry the war into northern England and even invade Ireland to help their fellow Celts throw-off the shackles of English rule.