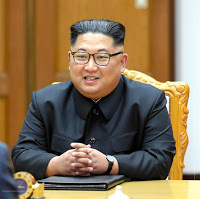 Facebook
Twitter
Pinterest
WhatsApp
Norkland
North Korea has been chirping a lot lately and none of it has made this blog because it’s “chirping”.  The official policy of the DPRK is that they will only feel safe when the US withdraws all its forces from Asia and eliminates ALL of its nuclear weapons that can reach North Korea. Chairman Kim said a year ago that North Korea supports denuclearization in the context of world-wide elimination of nuclear weapons. The North Korean idea of denuclearization of the Peninsula is a regional subset of Kim’s global messianic mission.

On a tactical level, this commentary makes clear that when Chairman Kim offered to dismantle the Yongbyon nuclear reactor in return for corresponding US action, Kim was referring to the destruction of some US nuclear facility. It is not a serious basis for any kind of exchange, and the North Korean leaders know it. The conclusion is inescapable that they deliberately published a position that they knew the US would reject so that they can end the talks and blame the US for their failure.
The Soviets and the Chinese have been fond of using the same tactic over the years when they wanted to terminate negotiations without incurring blame.
Some opine that Chairman Kim’s bonhomie has been a tactical ruse. It is another facet of the plan to induce South Korea to let down its guard and the US to reduce its commitment to the defense of “the Korean Peninsula.” However, the US need not have the fleet poised on the North Korean doorstep. “Rods from God” can rip down from orbit and remove the little tin pot dictatorship. Nuclear weapons aren’t the only option. As the US Space Force develops and grows, an expanded number of options that don’t violate any treaty in place will become more clear.
Back to the Norks. A range of hypotheses suggest themselves. One is that the Central Committee gave Kim’s outreach and détente policy a year in which to show substantial results. This commentary would then signal the end of the détente policy towards the US. If this is accurate, Kim’s New Year’s address in 10 days should make that clear.
Ending Foreign Adventures 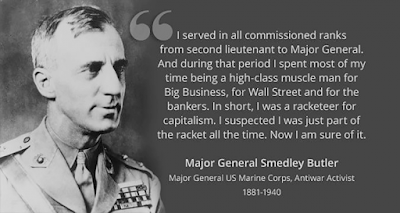 Afghans and others are likely to perceive that the announced draw-down of US forces there in Syria indicate that President Trump has lost confidence in the senior personnel who have managed the Syrian enterprise since 2011 and the Afghan enterprise for the past 17 years.
Those of you who have read this blog will understand that as a former participant in small wars, my particular opinion is that US policy of remaining at war for interminable periods constitutes “a racket” as General Smedley Darlington Butler put it so many years ago.

Smedley Darlington Butler was a United States Marine Corps major general, the highest rank authorized at that time, and at the time of his death the most decorated Marine in U.S. history.

President Bush authorized the CIA and US Special Operations Forces to engage the Afghan military post 9/11/01, largely because we had to attack somebody and because attacking Saudi Arabia, a US ally, wasn’t in the cards. I have no problem with the actions of CIA and SOF because they were effective. When “Big Army” moved in to take their place, it became a trillion dollar money pit. Blood and treasure flowed freely. What seventeen years of war do for America? What did it do for Afghanistan?
In December 1979, Soviet 40th Army moved south from Turkmenistan under a thick cloud cover that defeated satellite surveillance. Within two weeks, the Soviets deployed 100,000 soldiers, 1,800 tanks and 2,000 armored fighting vehicles to Afghanistan.
We stayed twice as long as the Soviets, and it can be argued that we accomplished less. If true, why should we remain? I believe that President Trump asks these same questions and that his instincts are correct despite the crooning of his detractors.