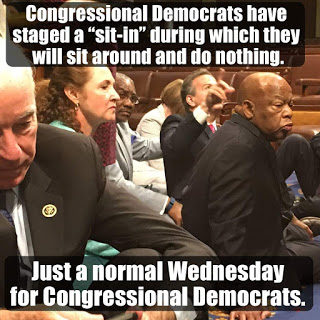 Democrats staged a sit-in yesterday, which means that they hung out until the pictures were taken and then their staffers fetched chairs and lunch for them.
Congress currently enjoys an 8% approval rating in America. I personally feel that rating is way too high.
What happened to term limits? Didn’t we do away with careers in the legislature? Or was the will of the people thwarted yet again?
I have grandchildren (all under the age of 7) who behave far better than the distinguished members of Congress. My granddaughter, Savannah (age 3) would never behave so disgracefully. Then again, she has been taught manners.
They really want to take firearms out of the hands of the people and leave them in the hands of the honest, trustworthy, faithful, law-abiding government (that transferred firearms to drug cartels in Mexico, for example). Thank you, no. 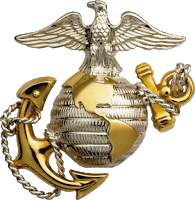 Lt. Gen. Jon Davis, the USMC deputy commandant for aviation, told Senate lawmakers that just 32 percent of the Corps’ Hornet fighters were operational. The branch needs at least 58 percent of the F/A-18s to be flight ready so that there are enough planes for combat, flight instruction and day-to-day training.
In their most recent annual report on aviation capabilities, Davis said, “I am concerned with our current readiness rates, both in equipment and personnel.”
The solution is that they’re at Davis-Monthan Air Force Base near Tucson, AZ, pulling aircraft out of the boneyard for service.  The Corps blames the delay of the F-35 (ten years after promised delivery in 2006), but the cuts to the military have gutted the services, which are at or lower levels of readiness than the US was before World War Two. Thanks Barack.
Launch-Boom

North Korea: On Wednesday, 22 June, North Korea launched two more Musudan/BM-25 intermediate range ballistic missiles from the launch site near Wonsan on the east coast.
The South Korean Joint Chiefs of Staff issued a statement that the first missile flew 150 kms and burst apart in flight. The second launch occurred two hours later. The Joint Chiefs said it flew 400 kms.
North Korea has launched six Musudan/BM-25 missiles since early April, five of which have failed in flight. It is not clear just what the failures and persistent testing signify.
They could mean that the missile threat is not as dangerous as previously thought. North Korea fielded the BM-25 to firing units without testing it about ten years ago. Military capabilities analysts presumed prudently that every missile with a launch unit would fire. Five failures could mean that an entire production batch is faulty. The North might be trying to make that determination. This is the missile system that can reach Guam, if the missiles work as designed.
Some experts believe that the Norks are testing a new modification of the missile and is having difficulty making it fly. This explanation would mean the threat from fielded missiles is unchanged, except that the North remains determined to increase the missile and nuclear threat to the South.
Another possible explanation is that North Korea is testing missiles for Iran, which bought a firing unit and 18 or 19 Musudan/BM-25 missiles from North Korea in 2005. Iran also has never displayed or tested the missiles, which are now at least 11 years old. The missile launches at Wonsan could be part of a North Korean program to test, replace or upgrade the missiles Iran possesses.

The Mainstream Media Asserts “No Bias” 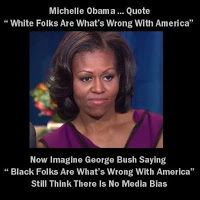 Some of you will be shocked, but according to MSNBC, they present fair and honest reporting of the news and the people who make the news.

If you don’t agree with MSNBC, you’ve been brainwashed by ‘white privilege’ to the extent that you feel no ‘white guilt’ (shame for having not been born a negro), you are a bigot, a racist, sexist, and are also likely Islamophobic and homophobic. You may also be Achondroplasiaphobic (the fear of midgets) and coulrophobic (fear of clowns). The fear of clowns takes us down to the next news item of vital importance, and may explain why people fear the Three Stooges more than Barack and friends.

Which do you prefer? 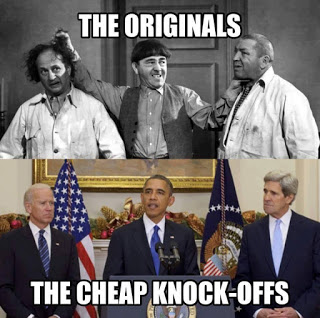 Some people think that the originals are always the best. Hollywood would differ since every single successful movie is re-made (rather than coming up with a new idea). Some suggest that politics stole from Hollywood in this latest Washington re-make.

I can’t stand watching the cheap knock-offs on television or when they make “news” – because it’s always bad news.  $150 billion to Iran to stop developing missiles and nukes – and the Iranians laugh and keep developing missiles and nukes and use the $150 billion to fund terrorism directed at us. Or the botched Arab Spring and the Benghazi Massacre. Or Fast and Furious, where they transferred many thousands of firearms to the Mexican drug cartels…and on…and on. 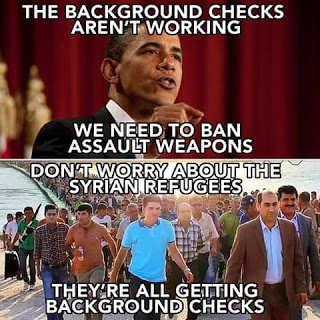 Do background checks work in the firearms acquisition process? No. They’re a joke. You only need to have a background check if you’re an honest, hard working, American. Criminals buy firearms from other criminals. The same is true of banning any class of weapon. Most categories of weapons are illegal to own in Mexico. When did that stop the cartels from buying anything that they want? It’s one of those straw-man arguments that progs make that don’t hold water.

If you want people to feel safe, do as the Swiss do. Train EVERYONE in the use of firearms and allow them all to carry. Punish crimes where firearms are used severely. That fixes it. The problem that Barack has is that it would end in locking up more inner city people…

And while we’re at it, we need to do what Trump suggests and that is take a very long and hard look at any Muslims who want to settle in the US…because background checks don’t work very well for them either. Background checks only work on honest, hard working, Americans. 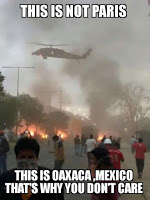 Several Mexican states have declared martial law (mostly in the far South of the country) and the situation there remains unresolved. Many small villages still don’t have tap water (in the village), and the government doesn’t do much to build infrastructure. Unemployment is rampant and wages are laughingly low. There are different standards in what MEXGOV is willing to spend in those states, generally populated by “Indians”.

Chiapas, Oaxaca, and Guerrero are the hardest hit and the insurrection has been going on for years. And no, the mainstream media doesn’t cover it because it’s Mexico. That’s just how it is. 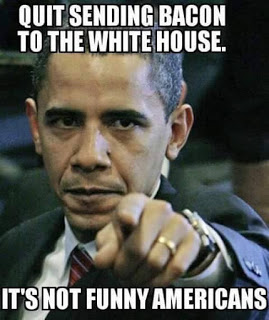