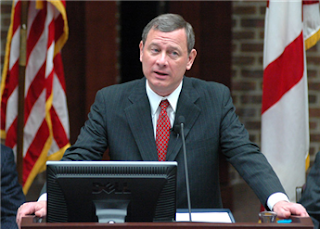 (h/t IBD) Waiting until asked, Chief Justice John Roberts finally expressed outrage at the intimidation of the Supreme Court during January’s State of the Union. “Bully pulpit” has a new meaning.

On Aug. 27, 1787, delegates to the Constitutional Convention discussed possible friction between the judicial branch and the other two. James Wilson of Pennsylvania worried that “judges would be in a bad situation if made to depend on every gust of faction which might prevail in the two branches of our government.”

Edmund Randolph of Virginia opposed a motion from John Dickinson of Delaware regarding the removal of federal judges for fear of “weakening too much the independence of the judges.” Dickinson countered that he “was not apprehensive” that the other branches “constructed on such different principles, would improperly unite for the purpose of displacing a judge.”

Lucky for those revered constitutional delegates they were dead 222 years when a president of the United States, a Senate and a House of Representatives did indeed “improperly unite for the purpose of displacing” Supreme Court justices. They physically united on the evening of Jan. 27, 2010, and literally roared down the necks of the impassively seated jurists.

Even the arguably furthest-to-the-left and newest member, Justice Sonia Sotomayor, was visibly uncomfortable as President [Barack Hussein] Obama declared, “With all due deference to separation of powers, last week the Supreme Court reversed a century of law that I believe will open the floodgates for special interests — including foreign corporations — to spend without limit in our elections.”

Had a George W. Bush or a Ronald Reagan so disparaged the justices present, the establishment media would have spent weeks ripping him apart. But since it came from a chief executive with a big government agenda, they instead took issue with Bush-appointed Justice Samuel Alito’s whisper — “not true.”

So no wonder Chief Justice Roberts, also a Bush appointee, speaking in Tuscaloosa on Tuesday, answered a University of Alabama law student’s question about criticism of the court as follows:

“The image of having the members of one branch of government standing up — literally surrounding the Supreme Court, cheering and hollering — while the court, according to the requirements of protocol, has to sit there expressionless, I think, is very troubling.”

Making it more troubling is the fact that what the president said was untrue. Far from scrapping “a century of law,” the court was protecting the freedom of political speech enshrined over two centuries ago in the First Amendment.

Still more troubling: the hundreds of liberal politicians becoming a mob, including some, like Sen. Charles Schumer, D-N.Y., just an arm’s length from the justices, growling their glee straight into the justices’ ears.

Most troubling of all, however, is that the stunt was designed to prepare for the next Supreme Court nomination. This president and the Democratic Congress want the public to join them in ganging up on the high court — because its majority so often refuses to place their big-spending agenda before the Constitution.