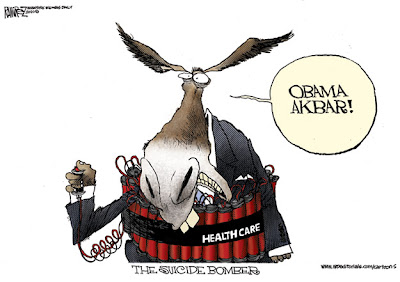 Good Bye Democratic Majority. Barack Hussein Obama is leading the Democrats off a cliff and the Democratic lemmings are running, panting after their Dear Leader.
(h/t IBD) for this analysis:

1. The people don’t want it! This, we would think, should have some bearing on decision-making. Yet the Democrats forge ahead without consent of the governed. In the latest Rasmussen poll, 53% opposed the Democrats’ reform while 42% were in favor. More than four in 10 “strongly” opposed; just two in 10 “strongly” favored. This jibes with other surveys, including our own IBD/TIPP Poll, taken since last year.

2. Doctors don’t want it! A survey we took last summer of 1,376 practicing physicians found that 45% would consider leaving their practices or taking early retirements if the Democrats’ reform became law. In December, the results were validated by a Medicus poll in which 25% of doctors said they’d retire early if a public option is implemented and another 21% would stop practicing even though they were far from their retirement years. Even if the bill doesn’t have a “public option,” nearly 30% said they’d quit the profession under the plans being considered.

3. Half the Congress doesn’t want it! Not a single Republican backed the health care bill that cleared the Senate on Christmas Eve 60-39. House passage was by a slim 220 to 215, and the lone Republican “aye” has since switched to “no.” Columnist Michael Barone says other changes would put the House vote today at 216-215 in favor, and he has doubts Democrats can even muster 216.

House Speaker Nancy Pelosi made her job of securing yes votes even more difficult last week when she told a meeting of county officials that “we have to pass the bill so you can find out what is in it.” (emphasis added) Members of Congress aren’t waiting: They’ve already exempted themselves from whatever they inflict on us.

4. People are happy with the health care they’ve got! Polls show that 84% of Americans have health insurance and that few are displeased with what they’ve got. Last month, the St. Petersburg Times looked at eight polls and reported that satisfaction rates averaged 87%.