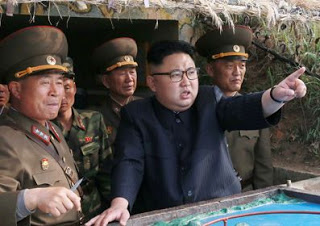 Facebook
Twitter
Pinterest
WhatsApp
The Norks
The fat little dictator, Kim Jong Un, playing his ‘mouse that roared’ scenario is over-playing his hand, but there’s nobody close to him who can explain it in a way that he will understand.
On 9 August, North Korean media published a statement by the Strategic Forces of the Korean People’s Army (KPA). The key paragraph follows.

“The KPA Strategic Forces is now carefully examining the operational plan for making an enveloping fire at the areas around Guam…The plan is to be reported to the Supreme Command soon after going through full examination and completion and will be put into practice in a multi-concurrent and consecutive way any moment once Kim Jong Un…makes a decision.”

This statement does not contain an explicit threat to Guam. It confirms that Guam is a North Korean ballistic missile target. It describes the higher-level approval process, which apparently has not been accomplished. It states a fact that execution of the plan requires a decision by Kim Jong Un.
The Strategic Force is North Korea’s missile command. A statement by the Supreme Command would be more ominous.
Multiple ballistic missile launches in 2016 and the two launches last month establish that North Korean missiles have the range to reach Guam. They might lack the accuracy to hit the island, but a near miss (or even not so near of a miss) would be an act of war.
The Norks are full of bluster as always, but they’re trying to make a point to the world, while they ramp up their plan to fight the US. I’ll distill some of the key elements of a long rant for the sake of brevity on this blog.

“Under the prevailing grave situation, the General Staff of the KPA clarifies at home and abroad its resolute stand as follows to mercilessly smash all sorts of military provocation, being planned by the U.S. imperialist warmongers, with the inexhaustible military might of the powerful revolutionary Paektusan army which has so far been built.”

“The provocative ‘preventive war’ the U.S. has devised and plans to execute will be countered with a just all-out war of wiping out all the strongholds of the enemies including the US mainland.”

“The US should remember, however, that once there is observed a sign of action for ‘preventive war’ from the US, the army of the DPRK will turn the US mainland into the theatre of a nuclear war before the inviolable land of the DPRK turns into the one.”

“The Korean-style earlier preemptive attack will burn up all the objects in the areas under the control of the first and third field armies of the puppet forces including Seoul the moment the U.S. reckless attempt at preemptive attack is spotted, and will lead to the all-out attack for neutralizing the launch bases of the U.S. imperialist aggression forces in the Pacific operational theatre together with the simultaneous strike at the depth of the whole of the southern half.”

North Korea is prepared to resist any secret operation that the US may mount.

“The anti-U.S. resistance of all the people including three million Children’s Union members and five million youths will smash to pieces the “secret operation” which the U.S. dreams to conduct in the DPRK.”

“The US has gone hysteric, being quite unaware of the army and people of the DPRK.”

“The DPRK is an invincible ideological power in which all the service personnel and people are united around their leader in single mind and a country of an impregnable fortress in which all the people are armed and the whole country has been fortified.”

“The UN Security Council on Saturday unanimously passed a resolution to impose ever tougher sanctions on North Korea. Many of these measures need to be paid by China, as China has been North Korea’s biggest trading partner due to geographic reasons….”

“The US is the sole superpower, but its media and elites are the most narrow-minded. They unreasonably require the whole world to serve US interests, which they view as universal values.”

The paragraphs that follow provide insights into Chinese thinking about the crisis.

“North Korea sees the US-South Korea alliance as a threat. Given various reasons, it embarked on the wrong path of developing nuclear and missile technology. Washington and Seoul take security as their core interests, but so does Pyongyang which is vulnerable to the US-South Korea alliance. If the enmity between the US and North Korea cannot be resolved, the motives of North Korea to own nuclear weapons and develop intercontinental ballistic missiles that can reach US soil will not cease.”

“External sanctions will only delay North Korea’s development of nuclear weapons and missiles, but cannot crush the determination of Pyongyang to stick to this path. Why does US society keep silent about such a simple and tested fact?”

“The US wants China to play a leading role in sanctioning Pyongyang so it can reap the benefits. Meanwhile, the US and South Korea could just be bystanders as China and North Korea confront each other…”

“Many Americans view the world through a superior lens. They believe only the US and the West are right in everything and the politics of non-Western countries are immature.”

“US society may have to reshape a broader vision and a rational way of thinking. Only when mainstream opinion is clear-headed, can the US cope with all kinds of challenges more effectively.”

This article makes it explicit that the Chinese are aware of the price they must pay to enforce the UN sanctions. They have decided to pay that price, but resent that the US and South Korea might benefit from Chinese sacrifices.
The Chinese leaders are sensitive to North Korea’s sense of vulnerability to the US-led alliance. They judge that North Korea has not chosen a wise path for handling it, but they also judge that North Korea will not take a different path until North Korea no longer feels threatened.
China considers sanctions a delaying tactic. The Chinese purpose is to achieve a suspension, not to coerce North Korea into stopping its programs. The message is that no one should expect that they will.
China is acutely aware that US policy would have the effect of substituting China for the US and South Korea in a confrontation with North Korea. China refuses to cooperate with that scheme.
Chinese leaders have fundamental differences with the US about the nature of the crisis, who must take the lead in a confrontation with North Korea and about the aims of sanctions. In short, the Chinese leaders do not trust the US leaders to behave in a way consistent with Chinese best interests.

The Trump Administration is not the Obama Administration and SECDEF Mattis is not some jumped-up political appointee. I still anticipate a kinetic war that will likely go nuclear on the Korean Peninsula within the next 5-6 months. The Norks are increasing hysterical and emotional and as stated above, their naive world view would likely cause them to react to something that is not intended as ‘preemptive action’. When missiles are flying back and forth, China, on the border with North Korea has far more to lose than they do by sanctioning North Korea and starving them into backing down — but they’re still very slow to do that.

My own personal judgment is that the Norks themselves are past the point of no-return.