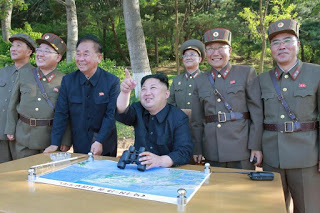 North Korea offered a clarification of its statement on August 8th, wherein they explained that Guam was a current target being considered. The clarification is that they plan to launch four Hwasong-12 intermediate range ballistic missiles at Guam later in August as a warning to the United States of America.

“As already clarified, the Strategic Force of the KPA is seriously examining the plan for an enveloping strike at Guam through simultaneous fire of four Hwasong-12 intermediate-range strategic ballistic rockets in order to interdict the enemy forces on major military bases on Guam and to signal a crucial warning to the US.”

“On Tuesday, the KPA Strategic Force through a statement of its spokesman fully warned the US against its all-round sanctions on the Democratic People’s Republic of Korea (DPRK) and moves of maximizing military threats to it.”
“But the US president at a gold (should be “golf”) links again let out a load of nonsense about ‘fire and fury,’ failing to grasp the on-going grave situation.”
“This is extremely getting on the nerves of the infuriated Hwasong artillerymen of the KPA. It seems that he has not yet understood the statement.”
“Sound dialogue is not possible with such a guy bereft of reason and only absolute force can work on him. This is the judgment made by the service personnel of the KPA Strategic Force.”
“The military action the KPA is about to take will be an effective remedy for restraining the frantic moves of the US in the southern part of the Korean peninsula and its vicinity.”
“The Hwasong artillerymen of the KPA Strategic Force are replete with a strong determination to fully demonstrate once again the invincible might of the force, which has developed into a reliable nuclear force of the Workers’ Party of Korea and the world’s strongest strike service, through the planned enveloping strike targeting the U.S. imperialist bases of aggression.”
“The Strategic Force is also considering the plan for opening to public the historic enveloping fire at Guam, a practical action targeting the U.S. bases of aggression.”
“This unprecedented step is to give stronger confidence in certain victory and courage to the Korean people and help them witness the wretched plight of the U.S. imperialists.”
“The Hwasong-12 rockets to be launched by the KPA will cross the sky above Shimane, Hiroshima and Koichi Prefectures of Japan. They will fly 3 356.7 km for 1 065 seconds and hit the waters 30 to 40 km away from Guam.”
“The KPA Strategic Force will finally complete the plan until mid-August and report it to the commander-in-chief of the DPRK nuclear force and wait for his order.”
“We keep closely watching the speech and behavior of the US.”

The format and content of the statement above, the description of the Hwasong rocket salvo, etc., follows the pattern of pre-launch rhetoric that we saw on their ballistic missile launches of  4 and 28 July.
It is a pre-launch warning notices to mariners, aircraft and to Japan that North Korea intends to launch missiles over Japan into the Pacific so as to bracket Guam sometime after mid-August. That is a normal requirement of international law. It means that Guam is in a North Korean closure area.
Under Kim Jong Un, one characteristic of the ballistic missile and nuclear programs is that the North Koreans have done what they said they would do, except for the nuclear detonation in April 2017.
Kim’s reflexive reaction to US actions, such as military exercises or the UN Security Council’s recent sanctions (which they blame on the US) has been to escalate with sharp rhetoric and to take physical action – launch missiles — without going to war.
Kim probably judges that he can launch a salvo of missiles without warheads which bracket Guam and that the US will not retaliate by striking North Korea. The North Korean diplomatic corps has hinted at “setting the mood” for talks and this may be one way that Kim Jong Un plans to prepare for talks where it makes demands of the US, which will cower in fear after the launch of 4 IRBM’s at Guam.
In the mind of the corpulent boy king, Kim Jong Un (the only fat man in North Korea), firing missiles over Japan at Guam, if given fair warning, is an acceptable demonstration of capacity and is not a declaration of war. The North Koreans have not made moves to mobilize the civilian work force, which will disrupt agricultural production. Their war plans call for protecting the work force in fall out shelters before war. That sort of disruption is very expensive and will risk starvation during the winter (unless China bails them out).
US Reaction
I’m just looking at dove entrails here. I could be wrong. But…
A shoot-down of the missiles would be a fair way of USGov to explain through actions how it feels and may not trigger a war, but this sort of behavior by China’s client state is exceptionally dangerous. If the missiles should hit Guam or go off course and hit Japan, there would likely be a US retaliatory strike. If the missiles are about to hit Guam and are shot down, there would likely be a US retaliatory strike. The North Koreans have stated that any retaliation for their behavior would mean war on the Korean Peninsula. For the North Koreans, that means their first use of nuclear weapons or gas weapons, which means the same thing to the US. The US would likely respond in kind and there we go.

Japan stated that it would shoot down missiles flying over its territory aimed at Guam. There are reports of Japanese construction of bomb shelters. Japan has also expressed an interest in doubling its navy (capacity to shoot down ballistic missiles). None of this will be pleasing to China, which would like to be Japan’s big brother.

Commentary
Based on historical context and precedence, the North Koreans could be deterred from this conduct by China. The Chinese did this and stopped the sixth nuclear weapons test that the Norks were planning to light off.  The Chinese did sign off on the most recent UN Security Council resolution that increased sanctions on North Korea for their missile testing (in violation of an earlier resolution).
It’s an incredibly touchy situation and people are going to be throwing advice back and forth to President Trump. Ultimately the US military response to North Korea will be the prevue of the Commander-in-Chief.
This will not be the last North Korean provocation (unless it leads to war, then it likely will be), and I stand by my prediction that there will be a war, likely a nuclear war, on the Korean Peninsula within the next 6 months.

The sly, corrupt, smug, elite, lying mainstream media blames President Trump – and his relationship with Russia. They may also blame global warming, but I don’t tune in enough to know if that’s the case. 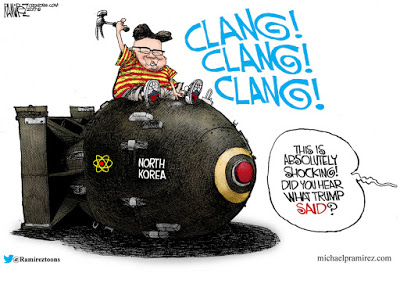