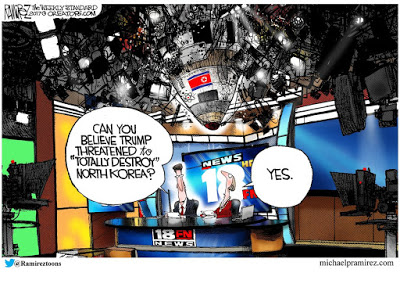 On 25 September, North Korea’s Foreign Minister Ri Yong Ho said a Twitter message by the US President on 23 September, in which the president warned that the minister and North Korean leader Kim Jong Un “won’t be around much longer” if they acted on their threats, amounted to a declaration of war.

The war of words has become strange because the latest threats signify nothing. The North Koreans know the US has not declared war. However, in their leadership bubble, insults against Kim are treated as if they were sacrilegious, physical attacks.

The propagandists backed up Ri’s language by releasing new photo-shopped videos of North Korean attacks against US aircraft carriers and bombers.
It is a fake news campaign. North Korea has no such capabilities. Nevertheless, some folks in the US believed that North Korea sank a US aircraft carrier on the 25th because the video was on the internet.
In this confrontation, the North Korean propagandists seem to have run out of ideas for conveying their outrage and their sense of the gravity of the confrontation. This is at least the second time they proclaimed the US declared war on North Korea since March. Most Americans were unaware that we declared war on North Korea, according to the North Koreans, in spring when Exercise Ulchi Freedom Guardian took place and practiced preemptive, preventive and decapitation scenarios.
Minister Ri’s rant was safe because it restated conditions that already exist. He knows that the US and North Korea have never ended the state of war. Under the Armistice, the North Koreans have the right to shoot down aircraft that they consider threatening. Ri threatened what North Korea already did in 1969 when it shot down a US reconnaissance aircraft, the EC-121.
Since then, the US always accepted that it would do so again, if it got the chance. On several occasions in the past decade or so it positioned fighter-interceptor aircraft at east coast airfields to attempt another shoot down, but failed.
The North Koreans also should know that the US avoids flying near hostile or contested air space and uses precision, long-range standoff weapons instead, fired from land and sea. After the First Gulf War, the North Koreans sent a study team to Iraq to learn how the US fights and why the Iraqis lost. They also should know about standoff weapons from watching Russian and Iranian cruise missiles attacks in Syria.
Minister Ri’s threat added nothing to the basic confrontation formula. Regardless of which side fires the first shot, North Korea will be destroyed. That has not changed.
My prediction that there will be a war between the US and its allies and North Korea this winter still stands. I don’t know what in specific will precipitate the war, but I view it as all but inevitable.
Kurdish Independence Referendum
The Kurdish independence referendum took place without significant incidents in the Kurdish autonomous region of Iraq. Some Arabs and Turkmens boycotted it, but the Kurds appear to have voted overwhelmingly in favor of independence.
Kurdish Regional Government President Barzani said the referendum would not draw borders, and that afterwards there could be talks with Baghdad for a year or two. But he stressed that the “failed partnership” with the “theocratic, sectarian state” of Iraq was over.
Barzani also said, “I have two options now: my people’s quest or other country’s satisfaction. I choose my people’s quest, even if it costs my life.” He emphasized that since Baghdad would never accept the independence referendum, neither now nor in the future, “We will not accept being part of Iraq, neither now, nor in the future.”
Baghad’s reaction. The Abadi administration declared the referendum not legally binding. It has refused to discuss the referendum with Barzani. Barzani’s remarks seem to rule out any basis for compromise. He is wily, so it is not clear that this is his position. If so, then his statements about using the referendum for leverage in political negotiations were deceptions or serious errors of judgment.

Literally, the entire world, except Israel, seems to oppose Kurdish independence. That means that it cannot occur.

China’s reaction. Chinese Foreign Ministry spokesman Lu Kang said during the daily news briefing on the 25th, “The Chinese government supports Iraq’s sovereignty, unity and territorial integrity.”
Iran’s reaction. An Iranian official denied a report that they closed the border with Iraqi Kurdistan in response to the independence referendum. The Foreign Ministry was quoted as saying the border was closed.
In a telephone conversation with Iraqi Prime Minister Abadi, Iranian President Rouhani “stressed his country’s full support for the Iraqi government and all its steps that have been taken to preserve Iraq’s unity and territorial integrity.”
Syria’s reaction. Syrian Foreign Minister al-Moualem said, “We in Syria only recognize a united Iraq and reject any procedure that leads to the fragmentation of Iraq.”
UN Security Council’s reaction. The Security Council unanimously expressed its regret that the Kurds held the referendum.
Turkey’s reaction. President Erdogan threatened to cut off the oil pipeline to Iraqi Kurdistan.

Turkish Foreign Minister Cavusoglu said, “The Turkish army will intervene immediately if our Turkmen brothers are physically targeted.” He also said, “Turkey considers the referendum as null and void. As the Foreign Ministry, we have already released a statement as soon as the voting began for the referendum.”

Wild Card. Will the US throw our Kurdish allies under the bus? We have a tradition of doing just that. Cast the runes if you’re so inclined, but it’s too soon to tell how all of this will work out. My money is on the Kurds.
Syria

There is a divergence of mission (creep) in Syria. Members of the U.S.-backed Syrian Democratic Forces (SDF) said Russian jets attacked them in the eastern Syrian province of Deir ez-Zor on 25 September. No casualties were reported.
This was the second attack in two weeks. Last week, the US Defense Department accused the Russians of bombing SDF positions on the eastern side of the river.
The Russians contend they attacked targets in Islamic State-controlled territory, which they consider a free fire zone.
Russian officials and media commentators are blaming the US for the death of Lieutenant General Asapov on 24 September.

Russian Deputy Foreign Minister Ryabkov told the press on the 25th “The death of the Russian commander is the price paid with blood for the hypocrisy of American policy in Syria. The American side declares that it is interested in the elimination of Daesh (the Islamic State) … but some of its actions show it is doing the opposite and that some political and geopolitical goals are more important for Washington.”

The Russians relate Asapov’s death to what they see as US double-dealing in the fight against the Islamic State. Konashenkov’s accusation is that imagery shows that the Islamic State is providing free passage to US special forces and to SDF elements in order to enable them to beat Syrian forces to the Syrian border with Iraq.
The geopolitical goals, to which Ryabkov referred, presumably are control of oil fields and blocking the Iranians in Syria. This means the SDF need to seize and hold key terrain.
A confrontation with the Russians and the Syrians became almost inevitable when US artillery and personnel joined in the fighting in Syria but refused to coordinate with the Russians. The forces shared the objective of destroying the Islamic State, but nothing else thereafter.
The Russians have been guided by the objective of restoring Syria to its pre-civil war status. The publicly stated US goal has been to defeat the Islamic State, but blocking Iran has emerged as a task that is more urgent than finishing off the Islamic State.
The Russian narrative is that blocking Iran requires the US to cooperate with some Islamic State elements. That complicates the Russian mission. They seem to have concluded that they now need to block the US and the SDF in order to accomplish their goal or restoring Syria to its pre-civil war borders.
In the past two days, this narrative has been prominent in Russian press reports about the fighting in Syria. The Russians will attack the SDF again and US casualties are increasingly likely.
This and Turkish threats against the Syrian Kurds in northern Syria are two elements in the next phase of the Syrian civil war.