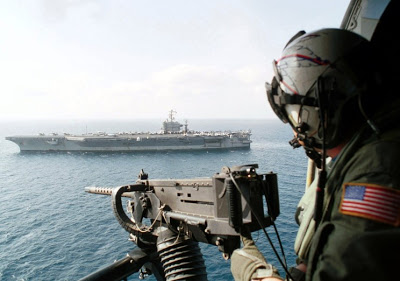 US Navy will deploy the USS Carl Vinson Carrier Strike Group to the Western Pacific today. “Haze Gray and Underway”– as reported in the Navy Times.  “Three surface ships will depart Naval Station San Diego today and join the USS Carl Vinson for a Composite Training Unit Exercise, or COMPTUEX, off the Southern California coast before heading west (toward North Korea),” Hicks, a US Navy spokesman said.

Background: COMPTUEX, or Composite Training Unit Exercise, is a rehearsal each US Navy Carrier Battle Group performs before departing for deployment. COMPUTEX is normally conducted during a two-week to three-week period six to eight weeks before deployment. Successfully completion of COMTPUEX certifies the carrier and its air wing as qualified for open ocean operations. COMPTUEX consists of an 18 day schedule of even driven exercise which the follows with an 3 day Final Battle Problem. It’s conducted and directed by the training carrier group commander and the focus is to bring together the carrier and it’s air wing as a working team that can operate in a combat environment, as well as integrating with other assets of the battle group.
What is being implied, but not explicitly stated, is that the USS Carl Vinson (CVN 70) and escorts will be conducting their rehearsals in transit in the general direction of North Korea.
South Korean President Lee Myung-bak said, “For the past two decades, we’ve made efforts to resolve the nuclear issue through dialogue and cooperation. But the reality is that North Korea doesn’t stop provocative acts and is still developing nuclear weapons…Only a few meters away from where shells landed, there was a school where classes were going on. I am outraged by the ruthlessness of the North Korean regime, which is indifferent to the lives of little children.”
With the ball firmly placed in China’s court, we see the next bounce.
Chairman of North Korea’s Supreme People’s Assembly, Choe Thae Bok, arrived from Pyongyang, breezing past reporters at Beijing’s Capital Airport without comment. (LINK) (Choe concurrently serves as a ruling Workers’ Party Secretary) was expected to meet top Chinese communist party officials and discuss last week’s artillery barrage, the North’s nuclear program and the U.S.-South Korean military drills.
Choe will return to North Korea this coming Saturday, suggesting that if China doesn’t come out in support of North Korea tomorrow, then China won’t make a statement about the situation on the Korean Peninsula until Saturday.
So China will jump in one direction or the other by Saturday. This is the key to knowing whether there will be a war — possibly a nuclear exchange — or not. 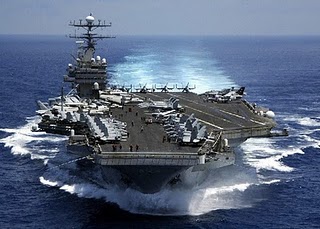 Background: The USS Carl Vinson (CVN 70), which transited from the east coast to the west coast earlier this year is making her first major overseas deployment since her 3 year nuclear refueling and significant systems upgrade. As nuclear powered aircraft carriers go, she is one of the most modern and prepared in the US inventory.
Escorting the USS Carl Vinson is the also recently upgraded and super modernized USS Bunker Hill (CG 52), which might be the most modernized and powerful surface combatant on the planet today, plus the USS Stockdale (DDG 106) and USS Gridley (DDG 101) who combined have only been commissioned for 5 years and 1 month. They are likely to pick up additional escorts as they pass Pearl Harbor. 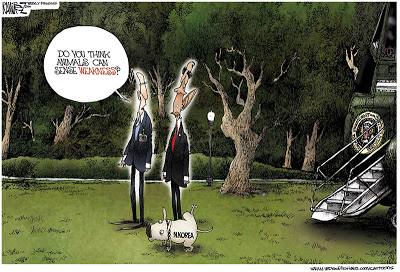 So this is how it stacks up:
The USS George Washington (CVN 73) Carrier Strike Group escorted by a large and capable number of US and South Korean Navy warships are exercising in the Yellow Sea. The USS Carl Vinson Carrier Strike Group is deploying from the US west coast, heading to the area. More than half the Japanese fleet is either at sea or on high readiness. The US Air Force is quietly positioning assets to take part in anything that might happen.
The USS Abraham Lincoln (CVN 72) is likely also heading to the area, though this isn’t confirmed.

Expect a very large gathering of very capable US submarines in the area to both defend the carrier strike groups and to provide offensive capability against targets in North Korea with sub-launched nuclear and conventional cruise missiles.

If I was a US war planner, and I’m not, I would target the North Korean missile and nuclear enrichment facilities for strikes and would also decapitate the North Korean command, control and communications capability first — and if regime change happens, so be it. Hopefully it will not come to war – but if it is war, we must act decisively to make it a short war.

China has allowed editorials critical of North Korea run in the daily papers all week. We didn’t see this following the Cheonan incident in March 2010 (when a North Korean submarine sank the South Korean destroyer Cheonan).
If I was a betting man, and I’m usually far too conservative for that, I would anticipate Chinese condemnation of North Korea and some sort of measurable and punitive sanction to be levied as a result. There will NOT be six party talks aimed at curbing the North Korean nuclear program – China will kick its dog and remove the food bowl for a few days to reinforce its position in the situation. Maybe one day in the future we will see some sort of “negotiate from strength” talks by the six parties involved — but not soon and not in the form of a reward to North Korea for murdering people for ‘shits and giggles’.