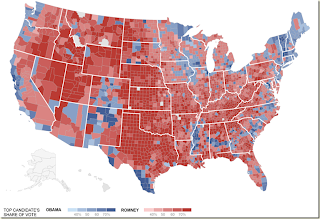 Red State/Blue State
“When you make peaceful protest impossible, you make violent revolution inevitable.”
— John F. Kennedy.
The movement to split eight northern Colorado counties united in opposition to the state’s new gun control laws and oil and gas regulations are reportedly considering forming a 51st U.S. state called North Colorado is not the only one. It is simply the latest. And by all accounts it may have some traction.

Commissioners said a “collective mass” of issues have cumulated during the past several years that isolate rural Colorado from the rest of the state and put those counties at a disadvantage.

They said they met with county commissioners at a Colorado Counties, Inc. conference earlier this week to discuss the feasibility of forming a new state, a question that would first be put to voters on the November ballot.

Far from being a uniting force, President Obama’s liberal agenda has served to split the nation. Nowhere is it more apparent than in Colorado. Liberal policies are forcing the state to balkanize in much the same way California has been threatening to do the same (for decades).

(Denver Post) “The people of rural Colorado are mad, and they have every right to be,” said U.S. Rep. Cory Gardner, a Republican from Yuma. “The governor and his Democrat colleagues in the statehouse have assaulted our way of life, and I don’t blame these people one bit for feeling attacked and unrepresented by the leaders of our state.”

The plan to carve off the northeastern corner of the state — Weld, Morgan, Logan, Sedgwick, Phillips, Washington, Yuma and Kit Carson counties — and form the state of North Colorado was hatched at a Colorado Counties Inc. conference earlier this week, Weld County spokeswoman Jennifer Finch said.

We know that this will be strongly opposed in Washington where a new “red state” would tend to tip the balance of power in the US Senate by presumably adding two more conservative US Senator’s to the good old boy’s club. And I suspect that the Colorado legislature won’t want to let those counties go because they contribute energy wealth to the state. At the same time, letting them go, may help the governor (under threat of recall) keep his job.
Will radical left wing reformation minded Governor John Hickenlooper cling to the tail of the tiger or will he let it go? How rabid of a socialist is the sixty-one year old Hickenlooper?

Radical reformers have to understand what President Kennedy said, quoted at the top of the page. He spoke of nations other than our own but people are people. And apparently citizens of at least eight counties in Colorado feel that they would be better served in a state that more closely represents their values.