Nobody Asked me about Obama — But — 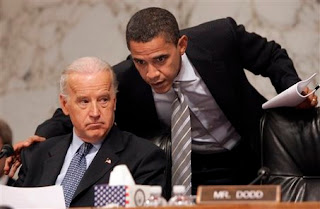 Obama watched basketball tonight because he didn’t care about the mid-term elections.

Biden is too senile to know that there were elections but somebody might let him know when they bring his warm milk tonight before he goes to sleep.

In Virginia, the swing between the Obama margin of victory in 2008 and the present voting is about 25% (source: Fox News). Both New Jersey and Virginia are there at the doorstep of Washington DC and the electorate repudiated the Democratic candidates. Virginia has gone Democrat for the past 8 years and New Jersey is a heavily Democratic State – and they’ve put a Republicans in charge.

In my opinion, they repudiated the Obama Administration – and this is why. Obama, to spite talking a very good game, hasn’t done anything positive in his first year in office. Quite the contrary, his utopian socialist policies concern America. The ACORN scandal unmasked his ground game. Americans find the behavior of the Chicago Team and their bullying tactics to be highly unethical. The sweeping generalities of the Candidate Obama’s speeches have not translated into anything positive. In fact, what he proposes is a dismantling of the US Constitution a piece at a time. Then there have been the gaffs – the Nobel Peace Prize, unwarranted, unearned and with the timing of the event, it made the president look like a fool. Published allegations of homosexuality and drug dealing by the president’s former lover, Larry Sinclair – unanswered by a mute White House, and the $800 billion stimulus bill that was a pay-back to political hacks and socialist front organizations such as ACORN, a racketeer influenced and corrupt organization.