No more swimming the Rio Grande? 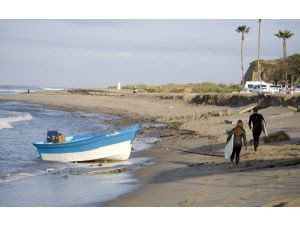 The Orange County Register (a Southern California newspaper) reports that illegal aliens are being smuggled across the US-Mexico border by sea in increasing numbers (CLICK HERE FOR THEIR STORY). As one would expect, the smugglers bring in narcotics along with their human cargo. It’s interesting to note that the Federal Government provided an $800K grant to the Orange County Sheriff’s Department to help them interdict illegal aliens — when they are suing the State of Arizona for trying to stem the flow of illegal aliens in support of federal law. If you think that it makes no sense — it doesn’t.

It’s interesting to note that the Orange County Register feels as if, “Maritime smuggling poses a threat to national security.” Of course, I agree that it does and it would seem that in this context the Department of Homeland Security agrees and has reached out to local law enforcement to help in their efforts in CALIFORNIA.  (photo left of illegal aliens running from a boat from the Orange County Register)

In Arizona, the Feds are at odds with the same concept and have declared vast tracts of land as “too dangerous for Americans” as they more or less surrender control of the border to lawless organized crime/narcotics cartels.

The barack hussein obama regime needs to be consistent in its efforts to control the border. Embracing the help offered by the State only makes sense. In California, Penal Code Section 849(b) authorized California’s law enforcement officers for several decades to do precisely what the Arizona 1070 law now allows their state officers to do.

MAINFO reports that protesters from the Democratic Party and affiliates are planning on protesting Arizona’s law that goes into effect this week.