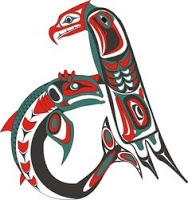 You can be serious about things and you can be light hearted. (Here is some Alaskan music for those of you who arrived seeking a different sort of spiritual inspiration that is in keeping with a shamanistic sermonette.) Since I’m not an animistic sort, this music is not for me.

When it comes to firearms, rocket launchers or explosives, my military training comes into play and I get serious as a heart attack. Thus the sermonette for a pleasant Sunday in autumn. Weapons are tools. Most tools can also be weapons with varying degrees of lethality. It’s important to match the tool to the job.
For a daily carry firearm either up on the rim at the White Wolf Mine or on the street, this one is not a bad choice. Because it’s not a semi-auto, it’s not a quick reload. But with six rounds, I should be able to eliminate the threat from six zombies (the others can decide how motivated they are) or one bear. This weapon is completely legal in the State of California and is considered insignificant by the legislature because it’s a revolver and the name “magnum” is not applied to the cartridge. 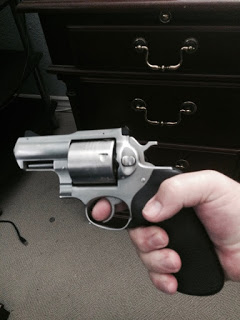 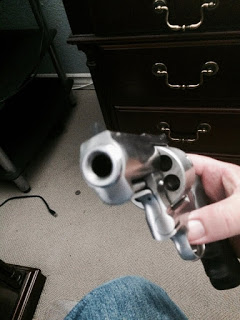 I’m holding the Ruger Super Redhawk Alaskan. You’ll see in the photo ( above right) that it does fit in my meaty hand just fine. The thick karate fingers lend themselves to handling the weapon. The weapon has significant recoil that is roughly comparable to my .460 V S&W revolver.
The holster (pictured below) comes from Simply Rugged Holsters (Prescott, AZ) and can be worn inside trousers with the keeper straps attached to the belt to hold it in place, or on the outside of the belt, with the belt threaded through the slots in the holster. I’m not big on paddle holsters (favored by law enforcement). This is more of a pancake style. 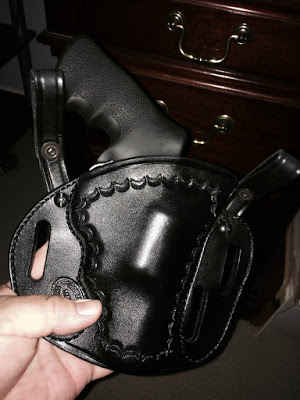 The weapon chambers either/both .45 Colt or .454 Casull as you prefer.
The video (HERE) shows a .45 ACP fired from a Glock Model 21 (which I favor) being fired into ballistic jel. The jel shows the wound channel that would occur in flesh if it was fired into a living being. The 2″ wound channel is serious.
Then it shows a .454 Casull round being fired into the jel and the wound channel is about 8+ inches across. Everything in that cavity that is created by the bullet passing through it would be completely pulverized if it had been fired into living tissue.
The depth of penetration is roughly the same but the effect on the target is different.