No Camo for Trannies

Facebook
Twitter
Pinterest
WhatsApp
Some are calling it a blow to the tranny movement.
Barack H. Obama, never a fan of the US Military, turned it into one vast social experiment. Ask anyone in uniform. The bulk of training involved ‘tranny training’ and other social justice-related training that had nothing to do with war fighting.
Military readiness and training activities all suffered in the previous administration because of mandatory efforts to make military members accept the “gender confused” (that’s as kind as I can make it).
Nobody is telling trannies that they can’t live out their kinks. Nobody is telling them that they can’t indulge themselves in switching (often back and forth). The USGOV is simply saying that they can’t do it in the US Military.
Maybe they need to become Catholic priests instead of warriors? Word is that the Pope is looking for a few good transexuals to take up the cross and spread the practice. 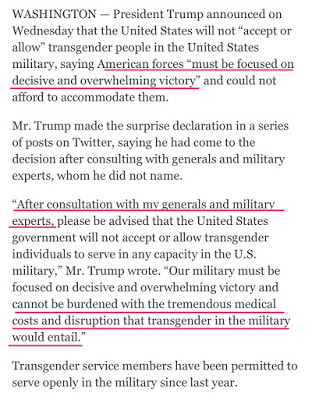 I realize that the radical left will recoil with anxiety because of this decision, but it makes perfect sense. MAGA.