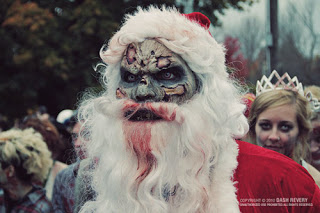 Corpses Burning On A Funeral Pyre

Everybody knows a vigorous head blow
Helps defeat the undead blight
Gun shots right between the running lights
Make it hard for zed to scream and bite.

America’s SgtMaj’s on his way

And so I’m offering this simple phrase

Breathe, relax, aim, and shoot
Despite the fact it may be the end of days
Merry Christmas to you!