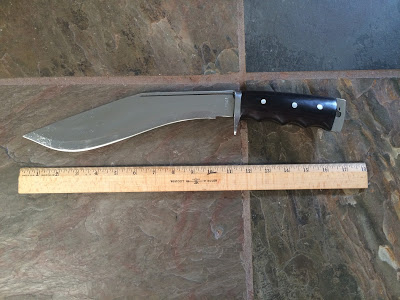 Facebook
Twitter
Pinterest
WhatsApp
The April 2015 Nepal earthquake (also known as the Gorkha/Ghurka earthquake) killed more than 8,800 people and injured more than 23,000. It occurred at 11:56 NST on 25 April, with a magnitude of 8.1,  which would get anyone’s attention. Hundreds of thousands of people were made homeless with entire villages flattened, across many districts of the country. Geophysicists and other experts had warned for decades that Nepal was vulnerable to a deadly earthquake, particularly because of its geology, urbanization, and architecture.
Many Nepalese men found homes and careers in the British Ghurka Regiment. Some of those men are personal friends. Many of those men lost their entire family in the earthquake. Even so, a friend, who I had asked for a three-chirra kukri (Ghurka military knife), managed to send one. I asked for a few blades before the quake and he sent the first. I didn’t expect to see it because of the disorder and personal tragedies associated with the earthquake. But Ghurkas are who they are.

Today I received an e-mail letting me know that in addition to the traditional water buffalo sheath (with the sharpening blade and utility blade) that the knife was shipped with, they’re also sending a kydex sheath because they know that Americans prefer them for daily carry. So I’m humbled.
Ghurka Knife Drill