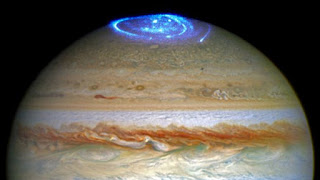 On July 4, at 8:18 p.m. PDT, Juno will fire its main engine, beginning a 35-minute burn that will place it into orbit around Jupiter.
During its mission of exploration, Juno will circle the Jovian world 37 times, soaring low over the planet’s cloud tops — as close as about 2,600 miles (4,100 kilometers). During these flybys, Juno will probe beneath the obscuring cloud cover of Jupiter and study its auroras to learn more about the planet’s origins, structure, atmosphere and magnetosphere.  http://www.nasa.gov/juno

“The atmospheric pressure at Earth is about one bar; at the centre of Jupiter it is 80 million bar,” explained mission team-member Fran Bagenal from the University of Colorado. “That’s like a thousand elephants, one on top of the other, with the bottom elephant standing on a stiletto.” 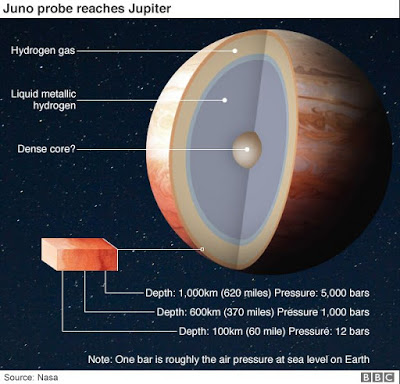