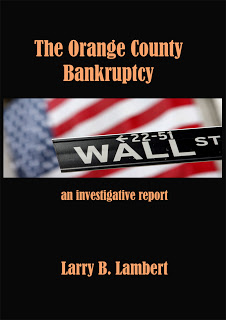 The US Bankrutpcy Code allows for counties and municipalities to seek bankruptcy protection under Chapter 9. No mention is made in the code for US States. The largest municipal bankruptcy in history occurred in Orange County, California and I managed the criminal investigation that resulted. Now, sixteen years later, a (90 page) report of that investigation will soon be available on Amazon.com, Kindle, on e-books and in book stores (on a for-order basis).
Orange County is the richest county in the richest half of the richest portion of the richest state in the richest nation on the planet. How did this happen?
For the first time, the true story of what transpired, and who caused what is available to the public. This report is factual and is made without prejudice or bias. It’s not written by a third party reporter or someone who had access to some of the facts. I had access to ALL of the facts and personally conducted most of the key investigative interviews. This is not a tell-all book in the sense of casting blame or pointing fingers. There was blame enough to be shared by everyone involved – The Orange County Board of Supervisors, The Orange County Treasurer, Merrill Lynch, Standard and Poors & Moodys Rating Services and other broker dealers.
***
On December 6, 1994, the County of Orange filed for Chapter 9 bankruptcy protection. County officials believed this action was necessary because of market losses to the Orange County Investment Pool (OCIP) estimated at the time to exceed $2,500,000,000. Due to a favorable selling environment, the actual losses were later tabulated at about $1,690,000,000. Citron managed funds worth $8 billion but had leveraged them to amounts from 158% to almost 300%. (The OCIP had been leveraged to $21 billion dollars.)
Orange County Treasurer Robert L. (Bob) Citron was the only Democratic Party politician within the Orange County Executive political community and the only one holding office on December 6, 1994 when Orange County declared bankruptcy.
Citron pled guilty to six felony counts and three special enhancements. Charges also included filing a false and misleading financial summary to participants purchasing securities in the Orange County Treasury Investment Pool. The court ordered Citron to serve five years of supervised probation, and to perform 1000 hours of community service. Citron did not serve any time in prison.
There are many lessons that can be drawn from this investigation, but perhaps the most striking one, which I believe that Bob Citron would agree with, was that he had absolutely no qualifications to manage funds of this magnitude. He ran for office unopposed for over twenty years, the public elected him because his name was the only one on the ballot. During the course of the investigation, I learned that Bob Citron kept his personal record of the funds, leveraged to $21 billion on the backs of a few manila folders. We obtained the ‘ledgers’ by way of a search warrant and they were duly booked as evidence.
Orange County arrived at a settlement with Merrill Lynch & Co, Inc. in 1998. Merrill Lynch paid $400,000,000 in civil fines and $10,000,000 in criminal penalties to settle accusations that it sold inappropriate and risky investments to Orange County Treasurer Robert L. (Bob) Citron. The agreement stipulated that Merrill Lynch not admit any liability. It remains the largest criminal fine levied and collected in the history of the State of California. Orange County lost $1.69 billion and eventually recovered about $600 million in total, including the $400 million from Merrill Lynch.

From the Investigative Summary-

“Robert L. Citron, elected Treasurer, his Assistant Treasurer Matt Raabe, and the Director of Management and Budget, Ronald Rubino were in a position to have “saved” the County, had they chosen to put the responsibilities of their office ahead of their personal ambitions and egos. Auditor-Controller Steve Lewis should have known, and had he exercised even the basic responsibilities of his office, he would have known the danger to the County, which resulted from Citron’s disastrous investment policy. The Board of Supervisors, and in particular, Supervisor Roger Stanton failed to supervise those elected officials who directly diverted funds, and failed to detect those illegal acts. Neither did he heed both implied and outright warnings of the impending disaster.

“Once the magnitude of the financial problem was known, Supervisor Stanton counseled other County officials, “do nothing, because if we do anything, it will be said that we could have done something.” (emphasis added) In large part the necessity of filing for Bankruptcy Protection under Chapter 9 resulted from the inability of the Supervisors to come to a decision. An eleventh hour bailout at very favorable interest rates had been arranged by J. P. Morgan & Co., which received the blessing of the Federal Reserve. That deal had been predicated on the acceptance of Orange County Government and their ability to appoint a Fiduciary.

“Had it been accepted, the County would not have needed to declare bankruptcy, and the resulting expense associated with the “less than investment grade” bonds the County sold would have been far lower. That deal was not accepted because there was no willingness to do anything. The investigation showed there was no resolve at the highest levels of County Management to do anything but blame each other in the hopes of retaining their political aspirations for future (and higher) office. In that way, in addition to those set forth previously, both Steiner and Stanton showed a total disregard for their public trust and responsibility.”

In a sense, it was politics as usual, and because of that, the lessons learned are as applicable today as they were in back then.