Characteristics of the Obama White House 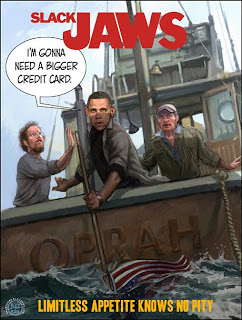 In America today, the single-minded pursuit of the irrelevant by the self-important progressive movement has a poster child in President Obama. America’s “golden age” of personal responsibility has been trashed; reason and truth trivialized in our society where the celebration of victimhood is the pinnacle of self-empowerment and self-actualization.
Between the rise of Islamic fundamentalism, a fundamentally fascist (i.e., anationalistic socialist) movement; and with the second wind that has been given to the remnants of the 20th century’s failed socialist and communist ‘experiments’ (in which millions of people were slaughtered by the compassionate and progressive left), we have truly entered a golden age of narcissism.
(H/T Dale – for the graphic – right)
Consider the characteristics of the malignant narcissist:
1. Shamelessness: Shame is the feeling that lurks beneath all unhealthy narcissism, and the inability to process shame in healthy ways.
2. Magical thinking: Narcissists see themselves as perfect using distortion and illusion known as magical thinking. They also use projection to dump shame onto others.
3. Arrogance: A narcissist who is feeling deflated may reinflate by diminishing, debasing, or degrading somebody else.
4. Envy: A narcissist may secure a sense of superiority in the face of another person’s ability by using contempt to minimize the other person.
5. Entitlement: Narcissists hold unreasonable expectations of particularly favorable treatment and automatic compliance because they consider themselves special. Failure to comply is considered an attack on their superiority, and the perpetrator is considered an “awkward” or “difficult” person. Defiance of their will is a narcissistic injury that can trigger narcissistic rage.
6. Exploitation: Can take many forms but always involves the exploitation of others without regard for their feelings or interests. Often the other is in a subservient position where resistance would be difficult or even impossible. Sometimes the subservience is not so much real as assumed.
7. Bad boundaries: Narcissists do not recognize that they have boundaries and that others are separate and are not extensions of themselves. Others either exist to meet their needs or may as well not exist at all. Those who provide narcissistic supply to the narcissist are treated as if they are part of the narcissist and are expected to live up to those expectations. In the mind of a narcissist there is no boundary between self and other.
The ideology of the political left in all its various iterations–socialist, communist, radical environmentalism, progressive; call it what you will — is, at its core an essentially narcissistic and self-indulgent pursuit of power, with all the unhealthy psychological attributes that implies.
This is not to suggest that narcissism or sociopathy exit merely within the political left. Clearly it does not. But, having made that qualification, today’s progressive leftist is steeped in and encouraged by an ideology that rewards only feelings and not critical thinking or truth; fantasy and not reality; and good intentions instead of actual outcome in the real world. The narcissists of this world (characterized above) lead the the poor, innocent and unsuspecting lefist into cognitive dissonance in his thinking patterns and wreak all sorts of misery and spiritual destruction on the people who are the targets of the leftists’ supposed goodwill.
But they neither care nor notice, since the primary determinant of why they do what they do is to make themselves feel good; to escape for one brief moment the emptiness of their own individual souls and the self-hatred and rage that motivate them.
Democrats and those on the left HAVE NO MORAL OR ETHICAL STANDARDS TO BEGIN WITH (that’s what moral relativism is all about), hence when their reprehensible behavior is exposed for all to see, they are utterly shameless about it. They have managed to convince themselves that they are, on the whole, morally superior to the common riff-raff (and certainly compared to evil Republicans and conservatives they perceive themselves to be virtual saints; champions of the poor and oppressed and leaders in goodness). For such a person how can any traditional rules of behavior apply? When you subscribe to an ideology that emphasizes how loving, compassionate, and caring and “reality-based” you are as its central theses, then you are home free! So, even when your reprehensible behavior is made public, then you are not mandated to feel any shame–shame is for losers. Think back for a moment to former Congressman Weiner, sending photos of his part to ladies nationwide from his chair on the floor of Congress.
Many Democrats and certainly most leftists are completely shameless in the sense that they will never ever, for as long as they can possibly get away with it, going to admit to bad behavior. And in those rare cases where they simply cannot wiggle and maneuver and lie and deceive; or self-righteously tell you how wonderful they really are and all the wonderful things they have done for the ‘little people’; they will simply pretend they are still virtuous and have been victimized in some way. What’s sad is that they often believe it themselves.