Home Blog Post Movie Review:...
Facebook
Twitter
Pinterest
WhatsApp
North Korea invades the Pacific Northwest in this remake of John Milius’ Red Dawn (1984) which took place in Colorado.
It’s Saturday afternoon and I had nothing to do — and it was the only thing playing at the theaters besides a few slasher films. The Christmas blockbusters haven’t been released yet. Thus, I saw Red Dawn. The trailers lasted twenty minutes and the coming attractions were mostly tepid.
On to the review.
The Audience
The movie is likely to appeal to teenagers and twenty-somethings who play X-Box 360 since that is the demographic that the plot was geared toward. If you’re that age and you play X-Box, you may find the movie appealing.
Problems with the Movie 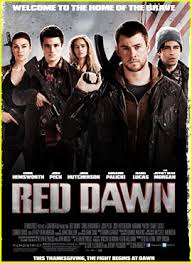 Totalitarian Rogue States Many people correctly deduce that the only rogue state one could use for this type of plot is the despicable North Koreans. China is communist in name only (90% of the businesses are free enterprise but it is a one-party system), Russia hasn’t been communist for two decades (it’s an oligarchy) and Obama (a closet Muslim)-Biden are utopian socialists and they will occupy the White House for another four years. Their cronies control the US Senate. The American people lowered the flag all on their own. It’s a brave new world. Why would anyone invade? However, I will push on with my review, rogue state politics aside.
Racial Issues The feature film is set in Spokane, Washington, with black actors making acting in roughly 1/3 of the significant roles even though Spokane is 90% white, 2.07% black, 1.7% American Indian and 2.25% Asian (all Asian and East Indian nationalities combined) (LINK). I’ve driven around Spokane before and you have to look long and hard for a black person. If you saw the first Red Dawn, the mayor’s son (white) turned traitor and led the Russians to the Wolverines. (SPOILER ALERT) In this film, the mayor is black and his son was unknowingly shot by a dart carrying a tracker–by the Russians. We can’t portray a person of color in a negative light, can we? The film is very politically correct, designed not to offend anyone but North Koreans and possibly Russians. There are a couple of Mexicans but they have minor roles and are killed off, not having a pressure group tied to Hollywood.
Military Equipment The problems are legion – but the North Koreans drive around in US vehicles and the film never explains how Robert Kitner (Josh Hutcherson) gets a hold of a US made squad automatic weapon (SAW) and limitless ammunition – X-Box 360…
The Women Adriane Palicki (cast as Toni) and Isabel Lucas (cast as Erica) are both very attractive but were not allowed by the script to develop much at all. Yes, expect a few tears and dramatic moments, but their characters play flat not because of the actresses, but because of what they had to work with.
Ending The film ends — all of a sudden. It’s as if, the film maker ran out of money and said, “Ok, it’s a wrap.” By this time in the film, the Wolverines are driving Mad Max style vehicles and for all I know, they’re headed for Thunderdome — but the movie ends so who knows?
Plot It is weak, underdeveloped, and you’d need another half an hour of film time to re-cut, rewrite it and make it meaningful in other than the very superficial way that they made it (see X-Box 360 above).
I give it a generous 3 out of a possible 10. (Caveat Emptor) Sadly, the critics were right.