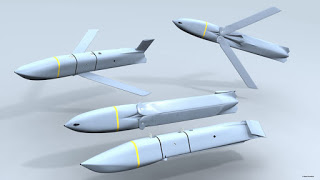 On 13 April 2018, the U.S. Air Force deployed the AGM-158B against Syria in response to the Syrian Governments alleged Chemical Weapon attack on its own people. The JASSM-ER was carried and fired by a U.S. Air Force B-1 Lancer bomber.
The Syrians reportedly volley fired around 40 unguided SAM’s after the cruise missiles struck. The insh-allah move is used as a face saving measure to show that nobody in Damascus or Homs was asleep at the switch. Reportedly the Russians watched the missiles come in and did not fire at them (not their fight?)
The US Navy has ordered the new AGM-158C Long Range Anti-Shipping Missile to replace its Harpoon missiles, which is interesting to me because I wasn’t sure what they had in mind. I’m still not sure that the AGM-158C is the Navy answer to the need because it’s an air-launched weapon, but it will do until they find something else. The nice thing about the AGM-158 is the 2000 lbs warhead. It packs a decent punch as the Syrians may attest to.