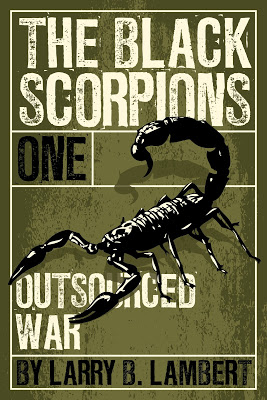 The Black Scorpions is a novella series available on Kindle. It’s a sequel to the novel, White Powder: A Novel of the CIA and the Secret War in Laos.

The Novel, White Powder, transported readers to the CIA’s Secret War in Laos circa 1961, in an environment where drug empires and governments collided. Fifty years have passed, and the more things change, the more they remain the same. Welcome to the world of the THE BLACK SCORPIONS, the second book in the Secret War Series, presented here in five parts.
Are they mercenaries or are they something more than that? Where do government operations end and private operations begin? Is outsourcing war legitimate or does it provide a layer of deniability and obscurity in an age of increased public scrutiny of elected officials? The answer may be, ‘who cares?’ The American military and a vast number of private military organizations augmenting them have been constantly at war with predominantly Islamic nations since September 11, 2001. During that time, most of America cared more about reality television programming and sports scores.
The first two pages of THE BLACK SCORPIONS – Outsourced War,  for your enjoyment:
1
JACKHAMMER
Jim Wilkins sat on a lopsided canvas-topped stool on the slat-wood Pisces dock in the Cabo San Lucas harbor, looking at the new 60 foot Hatteras Carolina-style sport fisherman that he would be boarding soon. Everything had been loaded aboard the Reel Good Time from steaks and beer to fishing tackle. He had watched as the crew finished prepping the boat for sea and what Jim hoped would be another world-class marlin run.
He left a voicemail message for his wife, Carly, back home in Virginia, telling her that he’d be staying in Mexico for another few days because the fishing had been phenomenal. She hadn’t called back or picked up for two days and it worried him. He punched her number into the cell phone one more time before the charter headed off to the fishing grounds and out of cell phone range. This time she answered.
“Hello?”
“I was beginning to worry about you, Carly. Did you get my message?”
“Yeah.”
“You didn’t call back.”
“I know, that’s so out of character for me. I’m such a predictable, cute little housewife.”
“So do you mind that I’m staying for another four or five days?”
Carly paused for a moment and then said, “I can’t really talk now.”
“Why, what are you doing?”
“When you told me that you planned to stay for what will amount to another week with your fishing buddies, I called in sick from work and caught a flight to Miami.”
“Huh? What? Why did you do that? Are you there now?”
“Hold on for a minute.”
“Why? What are you doing?”
“Just pullin’ on my fuck-me boots. In a couple of minutes, I’ll be heading out to a club here in Miami Beach. It was damned cold in Arlington and I didn’t want to do the town there. The nightlife is limited.” The line seemed dead because there was nothing from the other end. Carly said, “Musta lost you—are you there? Anyway, I’ve gotta go.”
“Which boots are you wearing?”
“My fuck-me-at-the-club boots. You know the tall black leather ones with chrome stiletto heels that you bought for my birthday back when we were dating. Why?”
“What else are you wearing?”
“That short leopard dress that you said I shouldn’t wear anymore because we’re married now. See ya when you get back—maybe.”
“You are such a bitch, Carly.”
She pushed the end button on her cell phone and then took a photo of herself in the mirror with the phone. The backdrop clearly showed a hotel room. Her hair was maxed, make-up perfect and the short leopard dress was barely long enough to hide what she had. Then she texted Jim the photo with the caption, ‘do I look horny’?
He paced the dock as he called. Carly let the phone ring until it went to voice mail. Then he called again and she picked up.
“I’m in Mexico with the guys and we’re fishing—not chasing skirt—you know that, right?
“Yeah. Of course.”
“Nice picture, but that’s not very cool of you to send it to me. Where are you really? At Jenny’s house in Catharpin?”
“I told you where I am, but I’ve gotta go because the limousine is waiting for me. And since it’s on your credit card, you should imagine that you’re enjoying the ride with me. I’ll be having a few cocktails and I won’t be driving, so I can toast your generosity.”
“I don’t want you to wear those boots.”
“How’s the fishing?”
“And you know I don’t want you to wear that dress.”
“I don’t plan on wearing it for long.”
Carly hung up and slipped a t-shirt on over her leopard dress. It fit skin tight and read, ‘my husband is out of town’ across the front in sparkling red letters. She took another photo in the mirror and texted it to him.
He called back immediately and she picked up.
“Having fun, Jim?”
“Not so much anymore.”
“At the expense of creating a fashion emergency, I’ll wear the t-shirt into whatever club the limo driver takes me to, over the top of the leopard skin—until somebody is man enough to tear it off me.”
I hope that you buy the story and enjoy the series! 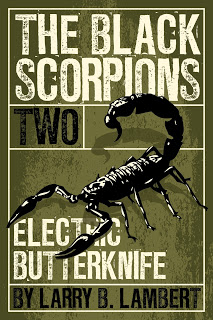 Electric Butterknife, the second in this series (each is about 50,000 words) picks up where Outsourced War left off. Whether not you believe that the story mirrors what happens in our modern world of private military companies which are hired by nations to do what they can’t openly do for themselves, I think that you’ll enjoy the read.
The Black Scorpions – Electric Butterknife
Coming February 1, 2013 on Kindle for $2.99
And don’t forget the novel that started the saga: 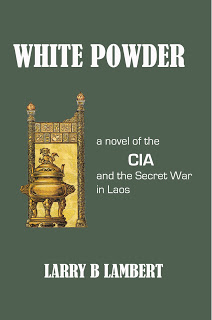 White Powder: A Novel of the CIA and the Secret War in Laos
Available everywhere in paperback for $14.95
or on Kindle for $8.99