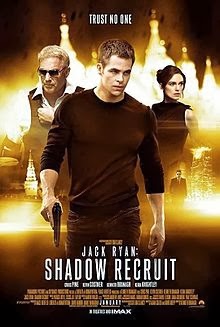 Hollywood is working to establish another franchise formula using Chris Pine as Tom Clancy’s character Jack Ryan. Shadow Recruit is not based on any of Clancy’s books or previous screenplays based on his books. The writer and production team decided to start from scratch, which is not a bad idea if it is to be a franchise with films every 18 months or so.
Pine was born in 1980, Keira Knightley, who plays his wife was born in 1985. While not a cougar, Knightley looks about ten years older than Pine. Does the chemistry work? I leave it to you to decide. To me it wasn’t bad, but I would have picked a different actress if I’d been casting the movie. Kevin Costner plays the old hand CIA mentor who finds and recruits Pine while he is recuperating at Walter Reed Army Hospital after having been wounded in Afghanistan.
The movie was not an action packed film (no spoilers) but Ryan shows himself to be a man who is able to break a few eggs. If you want a Jason Bourne film, you will be sadly disappointed. If you want to have a dose of reality, it doesn’t provide that either. It does deliver solid acting along with a moderately interesting script/plot in the espionage genre. The Russians are bad and want to take over the world (what else is new?) and Jack Ryan is there to stop them. There is no anti-Muslim terrorist plot line to disturb the Islamic lobby. You won’t be surprised to learn that Hossein Amini, an Iranian-Brit, wrote the screenplay. In a world where Arabs and Persians are responsible for somewhere close to 100% of the terrorism, one would have thought that producers could have come up with a more realistic scenario.
On a ten scale, I give the film a 7.5, which is not bad, but neither is it on its way to being a cult classic. I enjoyed the movie and it kept my attention.