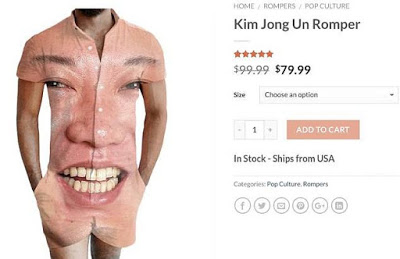 It is a politically correct onesie that your or your student (son/daughter) can wear at university while drinking $11.00 coffees & bad-mouthing the President or running to their safe spaces to sip coco. I hear that they’re blowing off the shelves in Berkeley and Harvard. Maybe a Christmas gift to your liberal friends or relatives? What could possibly be more cherished?
It’s an insult to Dear Leader to wear them as Halloween Rocketman costumes…but there’s no law against it
And while I’m on the topic of bizarre clothing, the new Harvey Weinstein fat suits are all the rage for Halloween. Hollywood directors will be wearing them on 10/31 in the high hopes of obtaining sex from the little children out trick-or-treating.
The ORIGINAL Harvey is hanging out at a chateau in France (or a fat farm in Arizona), undergoing ‘treatment’ for his sexual addiction that is being administered by maids in fetish outfits.

There has been yet another in an endless stream of rants from North Korea. This time, given by North Korean Foreign Minister Ri Yong Ho, speaking to the Russian news agency, TASS. Ri quoted Kim Jong Un who said that North Korea’s strategic forces … will not let America, an aggressor state, go unpunished. Ri depicted North Korea’s nuclear program in eschatological terms.

“Now it is the United States’ turn to pay, and all of our military servicemen and our entire people insistently demand that final scores be settled with the Americans only with a hail of fire, and not with words.”
“We have nearly achieved the final point on the way to our ultimate goal, to achieving a real balance of force with the United States. Our nuclear weapons will never be a subject matter of negotiations as long as the United States’ policy of pressure on the DPRK has not been uprooted once and for all.”

Ri said, in effect, that there can only be talks with the US after America (and President Trump) surrender to the ‘peace loving’ Democratic People’s Republic of Korea (North Korea), and after the Americans pay SUBSTANTIAL reparations to North Korea.
The Esteemed Supreme Dear Leader said once again, …”that it is a sacramental sword of justice, which allows for banishing the dark clouds of nuclear tyranny and ensuring an independent life of the whole of humanity under clear blue skies.”
Ri is well known to US diplomats and negotiators. He is courtly, soft-spoken and glib, speaking idiomatic American English. His recent rants against the US at the UN General Assembly session are judged to be out of character by those in the West and Australia who know him.

On 7 October, Ri was promoted to full membership in the Politburo. That is a testament to his Party and family credentials plus a personal relationship with Kim Jong Un. One implication of his prominence is that there is almost no chance of misunderstanding because of translation problems from American English to Korean when the US makes statements about North Korea. Another implication is that the messages are going directly to Kim Jong UN. A third is that Ri is Kim’s personal envoy and spokesman.

Mandarins in US intelligence circles are predicting that the next missile launch will demonstrate that North Korean missiles can reach cities on the US West Coast. They will not be aimed at the West Coast, but it’s a ranging issue – and will demonstrate capacity.
Ri’s remarks to TASS were elegantly phrased pretense and exaggeration. North Korea is not a victim, except of its own mismanagement and the Faustian bargain between the army and the Kim family. Kim can rule so long as he buys army loyalty. It does not want to be just left alone to develop in peace and security. Kim wants to conquer South Korea and exceed the achievements of his father and grandfather.
North Korea is threatened because it threatens aggression against South Korea. No nations look to North Korea for protection or justice. North Korea cannot achieve a balance of force against the US. If Ri is Kim’s personal spokesman, then Kim is delusional…which may be a shock to this blog’s readers.
China
The 19th Party Congress will convene in Beijing on 18 October. President Xi Jinping is expected to be re-elected to serve until 2022. Xi’s achievements, policies and the progress towards his “China Dream” of a moderately prosperous society by 2021 will be featured in leadership reports.
The continuing North Korean nuclear and missile confrontation is probably the most important failure in Xi’s leadership record during the past five years. It is the most unstable hotspot in Asia and it directly affects China’s strategic, security and economic interests.
North Korean nuclear and missile tests have damaged Chinese security interests in the past year by causing a strengthening of the US-South Korea-Japan alliance structure and by inducing South Korea to accept the deployment of the Terminal High Altitude Area Defense (THAAD) system. President Xi and his cohorts have been unable to reduce tension and restore stability or otherwise handle the Korean problem. Chinese party leaders have been advising and instructing their North Korean counterparts to refrain from any action that would detract from President Xi’s Congress.
Saudi Arabia (and Russia)
Another Russian mediation initiative. Russian Deputy Foreign Minister Mikhail Bogdanov said his country is ready to establish dialogue or organize bilateral contacts between Saudi Arabia and Iran.
Saudi Arabia and Iran cut diplomatic ties in 2016 after Iranian protesters attacked the Saudi embassy in Tehran in response to the execution of prominent Shiite cleric Nimr al-Nimr in Saudi Arabia.
Saudi Arabia has not commented on this Iranian news report. Prior to King Salman’s visit to Moscow, a Russian mediation offer had no chance of acceptance by Saudi Arabia. The timing of this initiative — so soon after King Salman’s visit — suggests exchanges during Salman’s visit encouraged the Russian Foreign Ministry to extend its good offices.
Since the military intervention in Syria in September 2015, the Russia Foreign Ministry has been pro-active in consolidating relations with its Asian neighbors. In addition to the new Saudi initiatives and the Syrian intervention, Russia has improved ties with Turkey, Afghanistan and Pakistan, longstanding US allies. It also has joined China in President Xi Jinping’s proposal for reducing tension on the Korean Peninsula.
It already has good ties with Iran and India and maintains contact with North Korea. Under Foreign Minister Lavrov, Russia has stabilized its southern flank and the Far East at relatively little cost, except for Syria. It also has emerged as and has regained the stature of a world leader.
Every advance in Russian interests has been at US expense. Russia is running a bluff most of the time because its resources are limited by low oil prices. Lavrov has leveraged those resources masterfully.
A Seismic Event in North Korea
The US Geological Survey reported that it detected a 2.9 magnitude earthquake near the North Korean nuclear testing site on 12 October.

“This event occurred in the area of the previous North Korean nuclear tests. The event has earthquake-like characteristics; however, we cannot conclusively confirm at this time the nature (natural or human-made) of the event. The depth is poorly constrained and has been held to 5 km by the seismologist.” 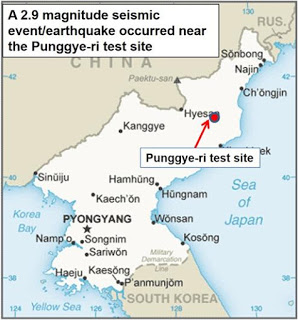 The event occurred 5 km deep and 23 km northwest of the test complex at Punggye-ri. Contacts with analysts indicate that there is no certainty the event is related to a nuclear test, but reported that it shared characteristics of past tests.
One suggestion is that it was a failed nuclear test. Another is that the event is related to tunnel digging. A third is that it reflects a delayed collapse of a tunnel from the last test.