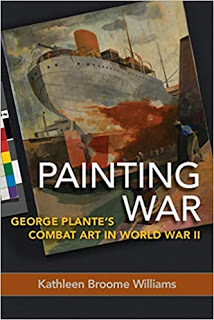 There are many ways to experience war. There are many ways to win a war, and just as many ways to lose one. This is a life review – in the form of a book by Kathleen Broome Williams, who has published extensively in naval history.
Scottish artist, George Plante, entered the Second World War as a volunteer radio operator crossing the Atlantic for two years with the British Merchant fleet. While he did that, he also painted. His days sailing on a feather merchant ended with a German torpedo that sank his ship. Surviving the sinking, he returned to Britain, where his painting had previously caught the attention of agents of the British Ministry of Information. They recruited him to use his paintings of the war at sea.
PAINTING WAR: George Plante’s Combat Art in World War II

Plante’s unusual wartime career spanned three continents, both on land and at sea. The book looks at war, warriors and war machines through George Plante’s eyes as accounted in his art, his memoirs and his vivid and articulate letters.

“…men who had already been torpedoed wore their life jackets all the time and often stayed up on deck while others slept.”

All warfare is psychological. All war requires interpretation for those engaged, because its participants see it in tiny granular fractions that they experience. The will to win during dark and challenging times requires a view of the larger effort of ‘why we fight’. Sometimes this is best portrayed by art, as seen from the first hand account of the artist.
Plante shipped out on Sourabaya, a 10,107 ton whale factory ship, pressed into carrying fuel oil instead of whale oil at the beginning of the war. His account of the smell of rancid whale blubber mixed with fuel oil was not accounted for on any of his paintings, but I personally found the same thing. Many of the memories of war are not in the sights but in the smells and the recollection of those brought other thoughts and experiences into focus.
Thus, the book is about George Plante’s combat art, but it’s a much larger story than that, recounted by a talented author.