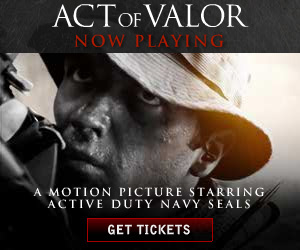 This movie has been promoted to the public because the producers elicited active duty naval special warfare operators to star in it.
I was torn – should I go or not? I expected that the movie would not live up to the hype and would be something like the Charlie Sheen Navy Seals movie that came out in the late 1970’s.
That’s really not what the movie did and if you want to read more about the film, is a good article:

“Waugh and McCoy based the script on real-life acts of valor they came upon by speaking informally with the SEALs over a six-month period. “They kept sharing all these acts of valor that had happened in their community — that you really wouldn’t believe until they said, ‘yeah that happened to Mark right next to me.’ And you were like, ‘what, that really happened?’” Waugh explained.

The movie is rated R because it’s violent in places and there are head-shots, but I don’t think that the violence was over-the-top. Truthfully, it’s fairly close to accurate from a Hollywood perspective. The acting isn’t stellar, but that’s not what the story is. Should you go see it?
I say, YES.

I particularly liked the scenes shot in Mexico…