Mexico is NOT Colombia 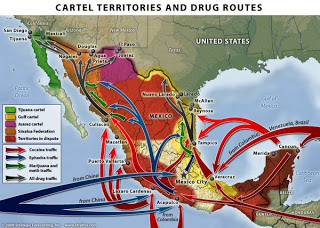 The
policies implemented by the Calderon Government in Mexico and backed by the
United States under the Merida Initiative and elsewhere have met with very
limited success on the ground in Mexico. There have been many photographs of
smiling Mexican soldiers and marines standing next to mountains of seized
narcotics, automatic weapons and US currency, but in a practical sense, the
problem persists unabated.
The
problem as I see it is not so much that Mexican Drug Trafficking Organizations
(DTO’s) supply drugs to a drug hungry America as it is that nobody wants to
seriously consider the eight hundred pound gorilla sitting in the corner. The
big question is one of the extent to which the Mexican government operates as
an extension of drug trafficking organizations. Efforts to determine this have
largely been superficial and concerted human intelligence collection programs
in Mexico have yet to be considered as a serious option.
One
day, the US will decide to address the problem of a DTO (mafia) run government
on our Southern Border and when that happens, maybe elements of these
suggestions could be dusted off and considered.
Mexico
is not Colombia, and while the supply-side measures taken by the Colombians,
supported by the United States were effective, simply cloning the Colombian
strategy is not enough. I won’t dwell on the differences between Colombia and
Mexico here and trust that the reader is sufficiently aware of those that they
don’t need to be rehashed here. There has been considerable evidence that
Mexican DTO’s are manufacturing methamphetamine products in Africa and Europe.
To some extent these products find their way into the North American narcotics
market as well.[1]
Colombia acted as a way station for processing and distributing cocaine. The
Mexican DTO’s have spread globally and the trend seems to be growing.
Will the Merida Initiative Work?
The
US Army War College found that the Merida Initiative, “is unlikely to achieve the desired results in Mexico. In
focusing largely on security, enforcement, and interdiction, the Merida Initiative pays comparatively little
attention to the deeper structural problems that fuel the drug trade and
drug-related violence. These problems, ranging from official corruption in
Mexico to large-scale drug consumption in the United States, have so far
frustrated Mexican attempts to rein in the cartels, and will likely hinder the
effectiveness of the Merida Initiative as well.” (emphasis added) Jumping to
Dr. Brands conclusion, in part, “The costs of action are therefore high, but
the price of inaction would be exponentially greater. The effects of drug use
in the United States and the potential for the economic and political
destabilization of Mexico make counternarcotics an immensely significant
national security issue.”[2]

Success
in combatting internal corruption and the DTO’s in Mexico requires a concerted
effort on the part of the US to assist those honest and trustworthy elements
within the Mexican Government. The only way that this can happen is though the
implementation of a genuine human intelligence effort within Mexico designed to
ferret out DTO infrastructure. Arrests of high profile DTO members have done
very little to impact infrastructure.
Seizures of arms, narcotics products and cash have had negligible impact
on DTO infrastructure. As they grow into truly worldwide organizations, this
will become increasingly difficult to accomplish. The longer the US waits on
the sidelines, the more entrenched the DTO’s will become.
[1] Mexico Operations Group Reports pertaining to La
Resistencia (Millennium Cartel) and Cartel Nueva Generacion Jalisco. For the
most part, the Joaquin Guzman Loera (El Chapo) DTO has focused on smuggling
cocaine to the European market through Africa and directly.
[2] Strategic Studies Institute, US Army War College, Dr.
Hal Brands, May 2009