The Courts are Playing Possum. 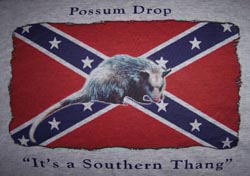 Just when you thought that things couldn’t get any weirder North Carolina Judge Fred Morrison ruled against the North Carolina tradition of the bringing in the new year by “dropping a possum”. The judge said, “Citizens are prohibited from capturing and using wild animals for pets or amusement,”

I guess that rules out pet possums too?

“It ain’t the new year until the possum drops” has been the saying around Brasstown, North Carolina for two decades — but not anymore. People for the Ethical Treatment of Animals (PETA) complained that the annual tradition was illegal and cruel. So they filed a lawsuit against the North Carolina Wildlife Resources Commission, which had issued a permit for the event every year.
Clay Logan, the owner of  Clays Corner Store – and the organizer of the annual drop explained it this way, “It’s just a lot of good, clean, family fun,” he said. “It seems like everybody always wants to jump on the clean family fun part. If we were all a bunch of drunks down here nobody would probably say nothing about it.”
Logan said they still plan to hold a New Year’s Eve celebration – and their working on an alternative plan. “It’ll either be a stuffed animal or road kill. We’re not gonna break no laws.”
Logan said he just doesn’t understand all the fuss about using a life possum. For years, they put the critter in a decorated cage and lowered him down at the stroke of midnight. Afterwards, they released the possum into the woods.
PETA argued that it was cruel. “That’s a matter of opinion,” Logan said. “He’s (the possum) treated good. Their destiny in life is to be run over,” he said. “So if you don’t get run over in 2012, I’ve extended his life to 2013.”
He said the New Year’s Eve celebration at his store is the one of the highlights of the year for Brasstown – population 240. Last year as many as 3,000 (boozed up participants) attended the festivities.
For PETA, and those of you carnivores, I offer a few possum recipes. You don’t need to kill the animal in the wild. As Clay Logan pointed out above, their destiny is to end up as road kill. If you choose to eat a possum found dead on the highway, try to make it a fresh kill.
No, I have never personally eaten a possum and don’t intend to. However, if it fits your taste and your lifestyle:

Ingredients:
Tomato Sauce (depends on possum)
1 tsp.-1 cup Chili Powder (Depends on Taste and possum)
1 Large possum or 3 small (If you ran over the possum better make it 4)
1 large pot or two large ones if the first isn’t enough.
5-10 chili peppers (depends on taste and possum)
5-10 red peppers (depends on taste and possum)
5-10 jalapenio peppers (depends on taste and possum)
How ever much Cayenne Pepper you like, it depends on your taste and possum.
1 tsp. Black Pepper
a pinch of salt
Chili Beans for extra flavor
And whatever other ingredients that are hot and spicy you would like to add.
Directions:
1. Skin possum(s)
2. Remove internal organs, head, claws, and bones. There is no flavor or use for these. But if you want to add them, Go ahead.
3. Put some tomatoe sauce in the pot(s). Then add the possum.
4. Chop peppers
5. Skip step four if you don’t want chopped peppers; it doesn’t matter.
6. Put the rest in and let set for a long dang while.
7. Before serving make sure you have enough bread, Milk, and Toliet paper for after dinner.
8. Serve. Enjoy
9. Race for bathroom. Whoever is first will make a large stench. Have enough air freshner.
Serving size of Meal-depends on how much you put in and on the possum.
Possum and Taters

Ingredients:
1 young, fat possum
8 sweet potatoes
2 tablespoons butter
1 tablespoon sugar
salt (to taste)
Directions: First, catch a possum. This in itself is excellent entertainment on a moonlight night. Skin the possum and remove the head and feet. Be sure to wash it thoroughly. Freeze overnight either outside or in a refrigerator. When ready to cook, peel the potatoes and boil them tender in lightly salted water along with the butter and sugar. At the same time, stew the possum tender in a tightly covered pan with a little water. Arrange the taters around the possum, strip with bacon, sprinkle with thyme or marjoram, or pepper, and brown in the oven. Baste often with the drippings.