More Commentary on the Democratic People’s Republic of Korea 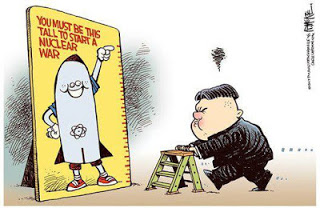 The Democratic People’s Republic of Korea wants the world to respect them (good luck with that). I sat down and thought about it and about their contribution to the planet. I can’t honestly think of one. It’s a tin pot Orwellian style dictatorship that is absolutely xenophobic where the leadership survives by blocking news of the outside world to the miserable proles in the DPRK.
They have managed to build a few atomic bombs in the hope of buying respect with nuclear blackmail, but the world doesn’t seem to recognize them in the way that they demand. Enter Kim Jung Un, the fat, young, sociopath that inherited the North Korean Dear Leader Franchise from his father and grandfather, who were also dear leaders.
The DPRK leadership dares not take the boot from the necks of the people because the people themselves would stretch Kim’s plump neck from the nearest light pole (oh, sorry, they don’t have much electricity do they?) — from the nearest tree.
Popular wisdom of the moment suggests that they’ll fire a missile out into the ocean without a warhead and will declare victory and stand down. That may not happen without the needed respect. China responded to their need of respect (and food) by sending two more divisions from the People’s Liberation Army to the border with North Korea in a show of disapproval. 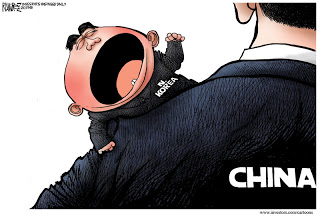 How much does China disapprove of the strident North Korean rhetoric – demanding nuclear war with the United States? I suspect that for China, the blush is off the rose. While the Chinese don’t want to see a unified Korea, Chinese prestige hangs in the balance and the one thing that the Chinese don’t enjoy seeing is a lack of respect for themselves because of their DPRK policies. If China was to spank Kim Jong Un, it would hurt because food shipments from China go a long way toward feeding the Koreans, who are always bordering on starvation.
I am not suggesting that the North Koreans won’t use their two or perhaps three nuclear weapons. I’m suggesting that they might simply to go out in a flash (blue flash) of glory as the US turns the country into a sea of radioactive glass. And if it comes to that, the world will lose a lot of innocent North Korean pawns.
The Russian and British Foreign Ministries and the US State Department reported that on 5 April the North Korean Foreign Ministry distributed a diplomatic circular to all resident embassies in Pyongyang and non-governmental organizations that the North Korean government would be unable to guarantee the safety of embassies and international organizations in the event of conflict from 10 April. The North Korean government asked foreign embassies whether they were considering evacuating staff.
The note is strange because it is not directive, but it allows only five days for departures. There are not enough scheduled flights between Pyongyang and Beijing to evacuate the foreign diplomats and staff in five days.

Expulsion of foreign diplomats is another classic warning indicator of war. North Korea has evacuated its embassies on multiple occasions, especially during the buildup to wars in the Middle East. Thus, North Korean officials know the significance of this action.

The DPRK is on a path that has prepared the nation for war and indicates its intention is to take military action that risks general war. After a stand down to rest and recover from the final phase of the Winter Training Cycle which ended on 31 March, the Korean People’s Army, as a force, will reach its point of maximum readiness after 10 April.
Deception is a mandatory part of every North Korean military action and has been used throughout the past two months. Deception was used during the nuclear test and the satellite launch. Deception is being used now at Kaesong and elsewhere to persuade reporters that the North’s intentions are more benign than the North’s own statements say they are. Doubt and confusion degrade vigilance and lengthen response time.
They are hiding their intentions in plain sight by using media and visual reports to reinforce biases that this is the same old thing; that they are bluffing. There are many familiar pieces, but the cumulative progression is new.
North Korea intends to take military actions that will risk general war, but will be short of the start of general war. However, North Korea will be prepared for escalation to general war instantly.

Thus far the public statements and other evidence indicate the military actions are likely to include missile launches against US bases, such as Guam, and a shooting incident against South Korean forces, such as those on the islands off the west coast. The North Koreans told the embassies that this can occur any time after 10 April. The Allies must assume they mean it.