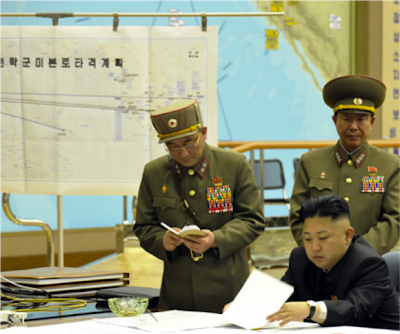 Facebook
Twitter
Pinterest
WhatsApp
Governor Rick Perry feels that the North Korean plan to attack Texas is simply another form of flattery. You can read about it on Politico. The UK Telegraph suggests that North Korea is targeting Texas for obliteration because Kim holds a grudge against George W. Bush.
There are a few unique things about San Antonio.
(1) Every Mexican drug cartel has more than one nice home in San Antonio. It is the US destination of choice for narcos who want to cool off or who want to move their families somewhere safe. Since so many rival cartels have antipathy toward each other , it’s odd that so many have chosen San Antonio. However, I’m not second guessing their decision. But why would North Korea want to target Mexican drug cartel leaders or their families? The simple answer is that they don’t. So this dog don’t hunt (I’m trying to speak Texan here).
(2) You can get some truly world class TexMex food in San Antonio’s restaurants. Would a North Korean nuclear attack on San Antonio simply remove the American will to live by eliminating a source of culinary delight? I doubt it. Koreans don’t usually appreciate the finer points of TexMex cooking.
(3) The San Antonio Spurs weren’t particularly nice to Dennis Rodman, friend of North Korea. While that is true, is it a reason to obliterate San Antonio?
(4) San Antonio is home to Lackland Air Force Base, which houses the US Air Force Cyber Command. This makes more sense than items 1-3 above, or the need to punish former President George W. Bush or jealousy as Gov. Perry suggests.

The North Koreans have recently been complaining about cyberattacks against their networks. (Rodong Sinmun and KCNA both seem to have been offline for recent periods.) On March 15, KCNA carried a statement stating that “intensive and persistent virus attacks are being made every day on internet servers operated by the DPRK,” asserting the attacks are “timed to coincide with the madcap Key Resolve joint military exercises being staged by the U.S. and other hostile forces,” and warning that North Korea “will never remain a passive onlooker to the enemies’ cyber attacks…”

(5) The Bracken Bat Cave is located in San Antonio. It’s possible that Kim Jung Un, a fan of US films as was his father, wants to “take out Batman” and he feels that a nuclear attack on San Antonio would solve his problem.