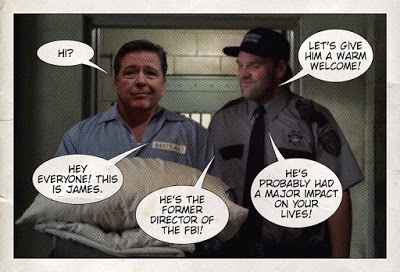 Will you send former Director Comey soap-on-a-rope when he goes to the big house?
Ok, before all of you skeptics attack me for being a Polyanna, it could happen. Yeah, I know that maybe pigs will fly.
I’m simply testing the depth of your compassion. Would you send him soap-on-a-rope or would you send him slick soap that he’s sure to drop in the communal prison shower?
US Army to name new Attack Helicopter

FORT RUCKER, Ala. — The U.S. Army will honor Elizabeth Warren and her Native American ancestry with the latest addition to its helicopter fleet, the AH-68 Warren, sources confirmed today.

The Warren will join the Black Hawk, Kiowa, Apache, and Lakota in the Army’s impressive legacy of combat aircraft named after Native American tribes… more

I’ve often thought that the Russians were on the track by training svelte supermodels to trap GI’s into giving up the nation’s secrets. Sweathogs working as waitresses always made more sense to me.

“For decades, we’ve trained elegant, sensual, intelligent women to lure high-level officers and diplomats into compromising ‘honeypot’ traps,” said Col. Vladimir Nutskoff. “As we tried to expand the program to send ballerinas and rocket scientists to seduce E-6 imagery analysts, we found that they couldn’t make eye contact with our agents. The system had to change.”

SVR agent Natalia Korchova has been successfully working a source since she gained twenty-five pounds, had a dolphin tattooed on her ankle, and adopted a cover as part time nursing student at Cochise College who waitresses at Texas Roadhouse on Military Mondays, sources confirmed.

In another successful recruitment, SVR agent Anya Egoranova, bought glasses and dyed a purple streak into her hair. She met her targets at The Android’s Dungeon Magic Lair, a Dungeons and Dragons meet-up and board games store near Fort Huachuca. At least four analysts are giving her classified documents, but none figured out how to kiss her.