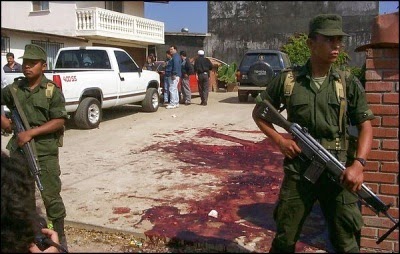 Facebook
Twitter
Pinterest
WhatsApp
I don’t go down to Mexico much anymore. No reason to. I did it for work back when–and I don’t do that work anymore. Three months after Mexican authorities triumphantly announced a dramatic reduction in the officially-recognized number of “disappeared”, they have walked this back significantly. Read on below the TV Series part for more on that.
There is a TV Series on Fox called, “The Bridge”. It’s a very good television series and the drug lord that they feature, “Fausto Galvan” is based loosely on a bad guy that I know personally. I recommend watching it. It’s in the second season so you should try and watch the first season to get the show in context. It takes just a bit of getting used to. Watch two or three episodes before you make up your mind.
Now onto reality from art, which is roughly the same thing. Yesterday, Assistant Attorney General Mariana Benitez announced to reporters that the number of Mexicans who disappeared since the country’s drug war began in 2006, according to official calculations, is 22,322. In May, Interior Minister Miguel Osorio Chong put the figure at 8,000. So which is it, and why the seemingly massive difference?

The AP explains:
Assistant Attorney General Mariana Benitez said 12,532 people went missing during the 2006-12 administration of President Felipe Calderon, who declared war on drug traffickers. An additional 9,790 have disappeared since President Enrique Pena Nieto took office on Dec. 1, 2012.
Benitez said that the list of people reported missing during Calderon’s government had gone up to 29,707, but that authorities arrived at the figure of 12,532 still missing after finding the rest alive or confirming their deaths.
She said a second list started with the Pena Nieto government showed 23,234 people reported missing between Dec. 1, 2012, and July 31, 2014. She said 13,444 of those had been located, leaving 9,790 still missing.

Of course, the news suggests that Osorio Chong provided a completely misleading account of the number of new disappearances since Enrique Peña Nieto took office (in May, he said roughly 3,000 had gone missing in 2013 and early 2014 ). Under normal circumstances this would be scandalous, but the plain truth is that that the Peña Nieto administration, like the Calderon administration before it, has consistently relied on using misleading statistics to cast its security strategy as a success.
But even setting this aside, the new numbers are unsettling on their own terms. Assuming Benitez’s account is accurate, 23,234 people have been reported missing in less than two years under Peña Nieto, compared with 29,707 over the course of six years under Calderon. That means that disappearance reports, if they remain stable, are on track to more than double those under the previous government.

RIDDLE ME THIS:
Now factor into this the arguments pro and con over whether to secure America’s southern border. Then again, maybe I’m being far to subtle in making my argument.

NOTE: President Obama claims 2 million deportations because the Obama Administration changed the way deportees are counted. Obama said anyone turned back at the border and denied entry into the US is counted as a person being deported. Does this sound right to you? They never set foot in the US and are counted as being deported.


There may be moments when I’m a huckleberry, but not this time.