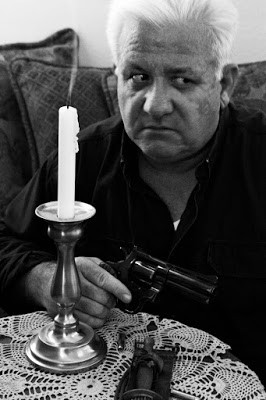 This is for fellow blogger, KLE (From Rhode Island). The Great State of Rhode Island covers 1,212 square miles. Coconino County, Arizona, home to the White Wolf Mine covers 18,661 square miles.

Kle Posted: Yeah, Rhode Island is a flaming garbage dump. We have a $10 billion budget, one million people, the worst roads in America, and 300,000 people on public assistance.

Coconino County has a population of 142,000. Essentially just over one square mile per person if it was evenly distributed. But it isn’t. Just about everyone in the county lives in Flagstaff. Metropolitan Flagstaff (in and near the city) where there are about 139,000 people. That leaves 3,000 people for the rest of the county. Within 80 miles of the White Wolf Mine in any direction there are about 50 permanent residents and there is no city. Far more horses than people.

Note: I don’t own a horse, but I’m working on convincing a friend to allow LSP to ride his mustang when the parson comes to visit next summer…

My second oldest daughter, Heather, was doing a photo project and she enlisted me in “lights, darks, contrasts and a theme”. She explained that it was my big chance to be a model. And since I’m essentially putty in my children’s hands, I went along with it. She grabbed the French Foreign Legion kepi blanc that I picked up in Corsica about (mumbles) years ago, one of my Colt Pythons, a WW2 commando/raider knife that my father brought home with him from from the war, lighted the candle and set the stage. I just provided the body.

Feel free to caption it if you’re of a mind. If you do so, be kind to a nearly helpless old man.
Weather

Without an effective weather tax, it’s snowing at the White Wolf Mine in Arizona. I’m not sure what politicians would promise in exchange for the tax – more moisture or less, or maybe they will make it rain lightly only at night?

There is no such thing as ‘government money’. It’s all taxpayer money — held in trust. That’s how I view tax money, but I’m sure that I wouldn’t be welcome in Washington.

I haven’t watched them. It’s a show, staged by the donkeys to try and prop up political support for the 2020 elections when they hope that one of their favored sons or daughters will sweep the field to become President. I’ve read summaries of the testimony offered and it’s just one of those spectacles with no substance like the Mueller Investigation. One thing is certain, if the Republicans hold the House and a Democrat becomes president, they will be justified in immediately initiating impeachment proceedings based on the BASELESS hearings that are being held by the donkeys.

It’s a disgrace to the nation and just confirms my previously held view of the Democrats in Congress.