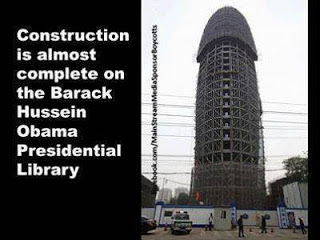 The building in Chicago is coming along, and might even be finished by the time Barack leaves office.
I don’t know what he plans to put in the library by way of glorious achievements. Obamacare may or may not survive his presidency. He could have displays honoring Operation Fast and Furious, or his fearsome red lines in Syria. Maybe something outlining his support for Planned Parenthood, which is ponying up some of the money for his edifice.
I’ve heard that there will be a fountain at the top of the building that will only flow on when Barack is in a ‘happy mood’. I think that there’s something about an implant that transmits a message or something high tech like that.
When you look at the building, which will be covered in flat-black glass, it screams progressiveness and hope/change, radically transforming America. 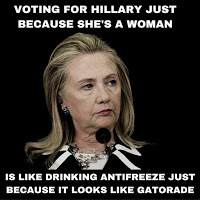 Then there his hand-picked successor, who has adopted the “I cannot tell a lie” meme to take her into the next four glorious years in Obama’s shadow.
I called Hillary’s campaign staff and told them that I wanted to buy the Churchill bust that used to be in the White House. They politely told me that they’d sell it to me as soon as the British sent it back.
It had been on loan from England and Barack had it crated up and sent to the UK.
They said that the original Constitution and Bill of Rights would be for sale as soon as she took office since America would not be needing them anymore.
In other news, Hillary didn’t accept the invitation to travel to Mexico and make the case for her policies (or lack thereof) against her rival, Donald Trump. It must be that she is simply too frail/ill to travel. Can you imagine the grand mal seizure right there at the dias? I’d pay good money to see it, but her handlers took a different approach. She feels that she can only lose ground by being seen. The media and flying monkeys are out there speaking on her behalf.