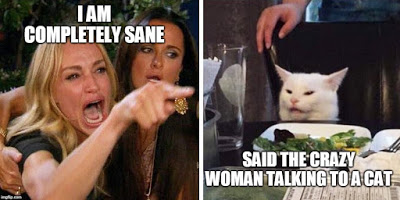 Facebook
Twitter
Pinterest
WhatsApp
The Illinois Trend
Illinois’ population decreased in 2019 by an estimated 51,250 people, or 0.4%, marking the sixth consecutive year the state has lost residents, according to new data from the U.S. Census Bureau.
Since the turn of the decade, Illinois has lost more residents than any other state, with a drop of about 159,700 people, or 1.2% of its population.
New York is expected to lose one seat at the House of Representatives (apportioned based on population) because of move-outs. So is California. Illinois is headed in that direction as well. These places are liberal paradises, why would anyone want to move?
For Cat Lovers

You know who you are and yes, I know for a fact that some cat lovers follow this blog from time to time.

It’s not a crime to talk to a cat. I’m not accusing anyone. It may not be a bad idea to talk to your cat.
This is my point and then I’ll move on.  Cats don’t listen to you (the way a dog would) if you speak to them. They are experts at ignoring you and showing disdain.
When I had a horse, I spoke to him all of the time. That was different. Horses understand. 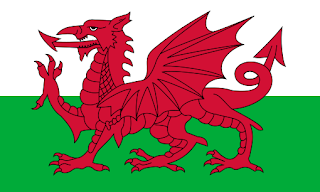 “Men of Harlech” or “The March of the Men of Harlech” (in Welsh: Rhyfelgyrch Gwŷr Harlech) is a song and military march which is traditionally said to describe events during the seven year long siege of Harlech Castle between 1461 and 1468. Commanded by Constable Dafydd ap Ieuan, the garrison held out in what is the longest known siege in the history of the British Isles.
“Through Seven Years” is an alternative name for the song. Now some associate the song with the earlier shorter siege of Harlech Castle around 1408, which pitted the forces of Owain Glyndŵr against the future Henry V of England. Men of Harlech is widely used as a regimental march, especially by British and Commonwealth regiments historically associated with Wales.
From the 1964 movie Zulu. 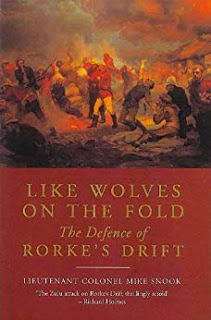 It was January 1879, during the Anglo-Zulu War. 150 British soldiers, many of whom were sick and wounded patients in a field hospital at Rorque’s Drift, who successfully held off a force of 4,000 Zulu warriors, some of whom were armed with rifles.*

The definitive work on the battle was written by Col. Mike Snook, RA (24th/41st Regiment). Like Wolves on the Fold The book is available at Amazon.com. If you have an interest in the Anglo-Zulu war, I also highly recommend How Can Men Die Better.

I further recommend that you buy them in hard cover and keep them as part of your personal reference library.

* June 1876, The American Army suffered a similar defeat to that suffered by the defeat of the British at Islandlwana. In the American scenario, merchants had been illegally selling advanced firearms – better than those issued by the Army – to the Souix and their allies. Thus when they met the Seventh Cavalry Regiment at the Little Bighorn, the Indians enjoyed an overwhelming superiority in numbers and in some cases, in firepower. 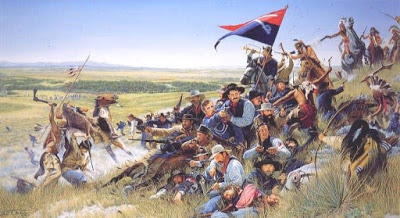 The same thing happened in Zululand, though it’s not portrayed that way in films or art. Thus, even though the Zulus armed themselves with Martini Henry rifles that they took from the 1st. Btn, elements of the 2nd Btn, 24th Foot Rgmt and from the Natal Native Contingent, etc., and used them with limited effect at Rorque’s Drift (the next two days), they also had modern rifles that had been purchased. The Zulu lacked marksmanship and training but they didn’t lack courage. Even though the line-up was 20,000 Zulus to 1,700 regular British troops and auxiliaries, it took great courage to confront and defeat the British line.

We can armchair quarterback the battles of Islandlwana and the subsequent battle of Rorque’s Drift in the same way that we can re-fight the Battle of the Little Bighorn. If Custer had waited for Terry’s or Crook’s infantry, if he’d brought his gatling guns (in a pack train many miles to the rear), if he hadn’t split the regiment (as Chelmsford did at Islandlwana), the outcome MIGHT have changed.

Donald Morris, researched the battle while he worked for CIA in Africa, retired to Arizona, and whom I knew, wrote “Washing of the Spears” and came to a number of wrong conclusions, among which was his hypothesis that the British ran out of ammunition. That was simply not the case. 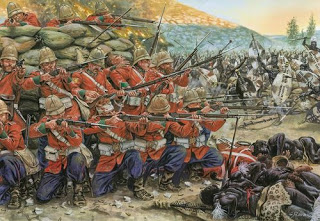 The problem with Custer’s scenario as well as with that of Brevet Lieutenant-Colonel Henry Pulleine 1/24th Foot, was that they failed to concentrate their forces when they did not know the enemy’s disposition. The Zulus did not make that mistake. Lieutenants Chard and Bromhead at Rorque’s Drift concentrated their 150 men behind sacks of meal and lagered wagons and held off forty times their numbers.

Though the counterattack by the Souix Confederation developed over time, numbers, the inability of Custer’s cavalry to concentrate in sufficient numbers, etc. told the tale. (a review of the battle field showing where each trooper died graphically illustrates that) Major Reno’s and Captain Benteen’s combined commands dug in at a defensible location, concentrated their numbers and their ammunition and lived to tell the story.

Lord Chelmsford did not make the same mistake when he re-invaded Zululand with 4,200 regular British soldiers, supported by 1,000 African troops, ten cannon (fired canister at the battle of Ulundi), gatling guns, etc. He concentrated his forces, tactically used a hollow (Wellington) square, supported by cannon and gatling gun fire and broke the back of the Zulu army, ending the war.

++ I don’t claim to be an expert on either of these battles. I simply read books and look at archeological facts. There’s always inference and I might be wrong. I’ve learned over time that there are blog readers out there who are far better referenced than I am. Feel free to take me to school if I’ve missed the mark.