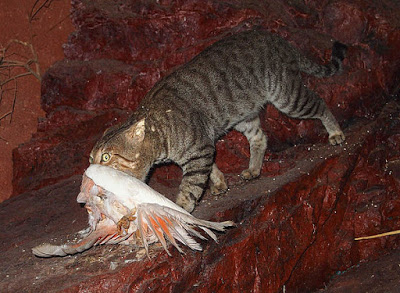 Facebook
Twitter
Pinterest
WhatsApp
The Great Culling
(Independent UK) The Australian government is airdropping poisonous sausages across thousands of hectares of land in an effort to kill millions of feral cats, according to reports.
It is just one of the tactics used by the government as part its plan to kill two million feral cats by 2020 in order to protect native species.
Cats are also trapped and shot by government officials. To date, 87% of the cats killed were shot by government hunters. The poisoning effort is expected to be more cost effective. The sausages are said by Australian experts to be irresistible to cats.
The cats die within 15 minutes after eating the sausages made with kangaroo meat, chicken fat, herbs, spices, catnip and the poison, 1080, the New York Times reported.
Planes distributing the poisoned treats drop 50 sausages every kilometre in areas where the cats roam free.