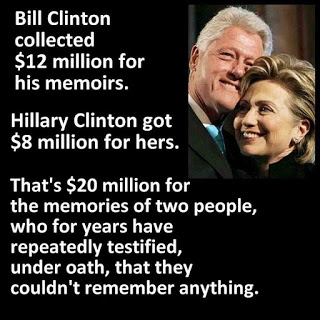 Nobody on MSNBC, CBS or ABC News have brought up Hillary Clinton’s failing memory as justification for shutting down her campaign. After the Benghazi Massacre, she suffered organic brain damage when she fell. Does anyone other than me recall that?
It goes far beyond Benghazi with Hillary and who among us can forget President Bill Clinton declaring with righteous zeal and indignation under oath that he ‘never had sexual relations with that woman’. Of course that was before the blue dress surfaced with his jiz all over it.
Bill and Hillary never really sold the goods to anyone. But they’re not evangelists.
To see somebody who is a master of bullshit, you need to review Jimmy Swaggert’s confession. Note that is AFTER the police found a prostitute and cocaine in his car. Before the police put an end to Jimmy picking up prostitutes and paying them from the “offerings” he received, Swaggert told a different story.
Bill Clinton did almost as well as Swaggert but the delivery needed work to come up to Swaggert’s acting.
Hillary swaggers like Swaggert (waddles in her pantsuits) but has no recollection except that the Benghazi attack had to do with a video.