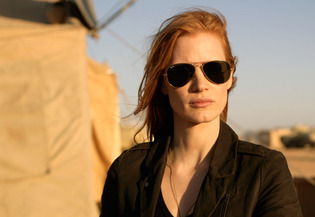 Facebook
Twitter
Pinterest
WhatsApp
I attended an advanced screening of Zero Dark Thirty and am offering my review based upon that feature film viewing and upon other accounts that are set forth below.
If you expect the movie to portray a genuine attempt to tell a real story, you will be disappointed because it doesn’t even pretend to do that — but as with most Hollywood efforts (ARGO comes to mind), there is a mixture of fact mingled with drama that meets the memes of the director and screenwriter who have a personal agenda. Every film and every book reflects the creator’s own perspectives and it’s not bad so long as you understand that IT IS NOT A DOCUMENTARY.

Warning – Contains Spoilers
In 2003, Maya (Jessica Chastain) is a young CIA analyst who has spent brief career focusing solely on intelligence related to al Qaeda and Osama bin Laden. She is reassigned from the Counterterrorism Center (CTC) to the US Embassy, Islamabad, to work with Dan (Jason Clarke), a case officer who is transiting between Pakistan and a “Black Site” where he interrogates Ammar (Reda Kateb), a terrorist. Ammar leads them to Abu Faraj, who the Pakistani police apprehend with CIA assistance. Maya interrogates Abu Faraj (Yoav Levi).

COMMENTARY: This isn’t the way that things happened historically and it’s a departure from reality in a number of areas, but it’s just a movie — remember that.

Maya’s adventures take a number of turns as she tracks Abu Ahmed, surviving when others around her are killed by terrorist attacks. Eventually she learns that Abu Ahmed is actually Habib Sayeed. Maya contacts Dan, now a headquarters gnome, and he helps her locate Abu Ahmed in a compound in Abbottabad, Pakistan.
You know the rest of the story, US Navy SEALs hit the compound and kill Osama bin Laden (and a few of his friends). There is some drama over whether or not bin Laden is there but it’s very contrived and doesn’t hold water if you want to know how things really work. But it’s Hollywood and to enjoy the movie you need to suspend disbelief.

“The CIA is a lot different than Hollywood portrays it to be,” reads an official explainer issued today by the Central Intelligence Agency – a thinly veiled attempt to continue debunking Zero Dark Thirty, the controversial Oscar favorite that its director admittedly hates. Referring to James Bond, the fictional MI6 agent, depictions of “shootouts and high speed chases,” and scenes of “CIA officers chasing terrorists through the American heartland,” the memo goes on to try and dispel an array of “myths” pertaining to the agency’s operations, from its impact on foreign policy to its ability to spy on Americans.

The effort follows a December 21 letter addressed to CIA employees from the agency’s acting director, Michael Morrell, concerning the “artistic license” of Zero Dark Thirty. Today’s release touches on the same themes: whether the CIA of our popular imagination corresponds to the CIA of reality, and how movies like Zero Dark Thirty (which isn’t name-checked directly) blur the distinction between fact and fantasy. Should you believe the CIA’s interpretation of Hollywood? (AtlanticWire)

The Washington Post carried an article by Jose Rodriguez, in part below:

Indeed, as I watched the story unfold on the screen, I found myself alternating between repulsion and delight.

First, my reasons for repulsion. “Zero Dark Thirty,” which will open for Washington audiences Friday, inaccurately links torture with intelligence success and mischaracterizes how America’s enemies have been treated in the fight against terrorism. Many others object to the film, however, because they think that the depiction of torture by the CIA is accurate but that the movie is wrong to imply that our interrogation techniques worked.

They are wrong on both counts. I was intimately involved in setting up and administering the CIA’s “enhanced interrogation” program, and I left the agency in 2007 secure in the knowledge not only that our program worked — but that it was not torture.

One of the advantages of inhabiting the world of Hollywood is that you can have things both ways. In the publicity campaign for the movie, the director and the screenwriter have stressed that “Zero Dark Thirty” was carefully researched and is fact-based. When discussing the so-called torture scenes, director Kathryn Bigelow has said: “I wish it was not part of our history, but it was.” Yet when pressed about inaccuracies, screenwriter Mark Boal has been quick to remind everyone: “This is not a documentary.”

What I haven’t heard anyone acknowledge is that the interrogation scenes torture the truth. Despite popular fiction — and the fiction that often masquerades as unbiased reporting — the enhanced interrogation program was carefully monitored and conducted. It bore little resemblance to what is shown on the screen.