File Under: Classification to Obfuscate Liability 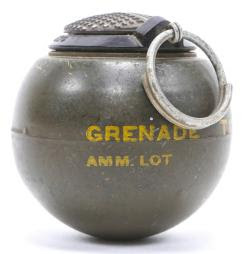 Facebook
Twitter
Pinterest
WhatsApp
The OSS T-13 “Beano” hand grenade was designed by the Office of Strategic Service c.1944 for general issue to American recruits, briefly manufactured by the Eastman Kodak Corp. in time for D-Day.

The T-13 was an experimental grenade design meant to mimic the weight, size and handling of a baseball, making it easy for new recruits to handle and throw them.
Instead of a safety lever, the T-13 had a knurled weighted cap held in place by the pin, which was, in turn, held in place before throwing by the soldier throwing the grenade like a knuckle ball with two or three fingers pressed on it.
When thrown, the cap was released and dragged a nylon string behind it that pulled on a pressure sensitive arming device, at which point any shock would instantly set off the explosive charge. 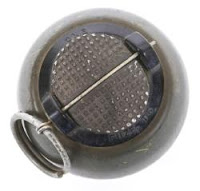 Although its basic principle was sound, the T-13′s percussive design proved to be its downfall.
As with literally all other similar designs, which were common in the early days of WW1, accidental/premature detonations were very common in the field, and it is believed this grenade killed more GI’s than enemy soldiers.
After that brief episode of disastrous field testing, all accounted for T-13 grenades were recalled and destroyed and all the documents pertaining to its design and use were classified – for the protection of the US Government. It’s difficult to show liability if the details of that liability are classified.
I know that many of you veterans out there are shocked that equipment defects are hidden by the Department of Defense.