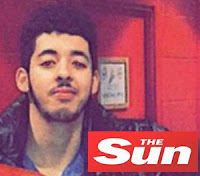 British Prime Minister May confirmed that the explosion was the work of the Muslim, Salman Abedi, a lone suicide bomber. The Prime Minister’s confirmation of a lone wolf attack was crafted to reassure the public that the threat is under control.
“remain calm”
Bomb makers generally do not execute suicide attacks and detonate their knowledge and expertise with their bomb.
The suicide bomb maker required support for the 20 separate functions that process information, material and energy to operate and manufacture bomb(s).
Some source had to finance the operation, including the purchase of explosives and materials. The explosives had to reach the bomb maker. Alternatively, the suicide bomber had to be instructed by someone in making his own bomb. He lived somewhere and required daily necessities. The timing and location of the blast indicate a pre-meditated and well-planned attack.
British security services are aware of these systemic components of terrorist attacks. Four arrests have been made (including Abedi’s 23-year-old brother, Ismail, according to the BBC)  and there will be more arrests, though the British will not report details of a terrorist cell or cells in Manchester.

(The Guardian) The British army is to deploy about 800 troops around the UK to support police in the aftermath of the Manchester attack.

The troops will be stationed from later today, replacing police guards at No 10 Downing Street, parliament and Buckingham Palace, and elsewhere around London.

The British Army does have the troops to deploy in and around the UK to support the police, but they are at the lowest staffing point since the 19th Century, and their resources are limited.
Theresa May said troops would be deployed to provide static guards in England under the government’s Operation Temperer plan to free up armed police officers from guarding duties. Those sites included Buckingham Palace, Downing Street, the Houses of Parliament and foreign embassies in London.
MI-5 (domestic intelligence) was aware that Salman Abedi was part of a Muslim terror cell before the bombing, and they may have been aware of the interlinkage between his cell and others. They now know that there is an active bomb-making system at work. Whether that will translate into action against those cells on a broad basis has yet to be seen, but since the alert status was raised to “critical” in the UK, my sense is that they are taking this seriously.
Political will requires that the UK acknowledge that the enemy consists of Muslim terrorists. The problem that Britain has is that it’s allowed millions of Muslims to settle in the UK – and as with elsewhere in the world, the general rule of thumb is that 25% have jihadist sympathies. Of those who sympathize with the jihadists, maybe 10% are willing to carry out attacks and be personally involved. My rough rule of thumb is that means that the British Police have somewhere between 25,000 and 50,000 radical jihadis to worry about in the country, most of whom will carry British passports.