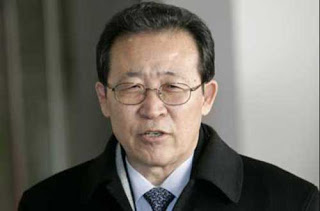 On 25 May, in response to the US letter canceling the 12 June summit, the Korean Central News Agency, (KCNA) published in English a statement by North Korean First Vice Foreign Minister Kim Kye Gwan. It’s interesting on how fast the Norks put out their response. My personal sense is that Kim Jong Un (Little Rocket Man/Dear Leader) wanted the meeting and his minions screwed it up by thinking that they could manipulate US interest in a meeting for “free stuff”. President Trump said, ‘no’.

“The inglorious situation today is a vivid expression of the severity of the present status of the hostile DPRK-U.S. relations of long historical roots and the urgent necessity for the summit meeting for the improvement of the ties.”

“As far as the historic DPRK-U.S. summit is concerned, we have inwardly highly appreciated President Trump for having made the bold decision, which any other U.S. presidents dared not, and made efforts for such a crucial event as the summit.”

“His sudden and unilateral announcement to cancel the summit is something unexpected to us and we cannot but feel great regret for it.”

“It is hard to guess the reasons.”

Kim Kye Gwan’s statement on 16 May was pivotal in the negative turn in Kim Jong Un’s détente initiative. He now has the job of damage limitation and repair.
His statement of regret indicates that North Korea overreached. It might have been his advice about the US administration and negotiating maneuvers that backfired. At the least, he is the responsible official. Vice Minister Choe, who disparaged the US Vice President, is his protégé.

As for the substance of the statement, North Korea is treating the cancellation as a postponement, which is consistent with the message in the US President’s letter.

Kim Jong Un wants a meeting. It also attests that Kim Jong Un has been involved in summit preparations. That raises questions about who directed the negative turn in North Korean public statements since 10 May.
Kim wants, or maybe needs, the US summit meeting. His propaganda outlets and Foreign Ministry contrived to make it appear that he could walk away from a meeting, but obviously he cannot and does not intend to. If his end-state is a unified Korea, for example, he cannot achieve it without engaging the US in negotiations. His team almost destroyed any chance of making progress towards that end-state during this US administration.
South Korean President Moon did not demand an apology, nor did he modify his outreach strategy. The North Koreans apparently expected the US to behave in the same fashion.
… the US did not. The North Koreans grossly misjudged the US administration, which declined to act according to custom. The US neither took the high-road of looking past the insults nor did it react emotionally. The US message is that the North is not ready – mature enough? – to make deals in the big leagues. Now the North, in fact, is asking for talks, contradicting the hubris in Vice Foreign Minister Choe’s insulting statement on the 23d.
The North seems much more comfortable acting the bully. But they just got trumped.
China-North Korea
At the press session on 24 May, Chinese Foreign Ministry spokesman Lu Kang was asked whether he could comment on the delegation of senior North Korean officials that went to the official guesthouse in Beijing on 24 May.
Lu denied any knowledge of the visitors.
I suspect Kim made another trip to consult with Chinese President Xi.
Afghanistan
On 24 May, the Special Inspector General for Afghanistan Reconstruction (SIGAR) published a report of lessons learned from US involvement in Afghanistan between 2002 and 2017. It is titled, Stabilization: Lessons from the U.S. Experience in Afghanistan and is available on the SIGAR’s website. The report is the culmination of three years of work to discern lessons learned and runs to 285 pages.
The SIGAR’s analysis identifies seven key findings, copied below, regarding the stabilization strategy in Afghanistan and the programs used to achieve it:
1. The U.S. government greatly overestimated its ability to build and reform government institutions in Afghanistan as part of its stabilization strategy.
2. The stabilization strategy and the programs used to achieve it were not properly tailored to the Afghan context.
3. The large sums of stabilization dollars the United States devoted to Afghanistan in search of quick gains often exacerbated conflicts, enabled corruption, and bolstered support for insurgents.
4. Because the coalition prioritized the most dangerous districts first, it continuously struggled to clear them of insurgents. As a result, the coalition couldn’t make sufficient progress to convince Afghans in those or other districts that the government could protect them if they openly turned against the insurgents.
5. Efforts by U.S. agencies to monitor and evaluate stabilization programs were generally poor.
6. Successes in stabilizing Afghan districts rarely lasted longer than the physical presence of coalition troops and civilians.
7. Stabilization was most successful in areas that were clearly under the physical control of government security forces, had a modicum of local governance in place prior to programming, were supported by coalition forces and civilians who recognized the value of close cooperation, and were continuously engaged by their government as programming ramped up.
The report is packed with more cogent, discouraging findings for those who have followed Afghanistan since before the Soviet intervention in 1979. It would serve no purpose to repeat them here.
One important lesson from Vietnam that is not included is about the need to destroy bases and safe havens in an adjacent country. The Taliban were soundly beaten in 2001. Afghanistan was stable through 2005. The Taliban leaders and many fighters were driven into Pakistan. There, they were allowed to regroup, recover and rearm with impunity and with protection.
Syria-Israel

Syrian state media reported that a military airport near Homs was subject to “missile aggression” on 24 May. Syria claimed that a missile was intercepted by the Syrian air defense system before it reached its target.
The Syrian Observatory for Human Rights said at least 12 pro-government fighters were killed in the airstrike. According to the monitoring group, none of the fatalities were Syrian nationals but foreign fighters.
A Syrian source close to the government said the attack struck bases where Iranian Islamic Revolution Guards Corps soldiers were located.
The Israeli threat to attack Iranian and Iranian proxy forces is real. The campaign continues to prevent Iran from consolidating its presence in Syria.
On 23 May, a senior Israel Defense Force spokesman said that if Syria activates its air defense, Israel will destroy them.