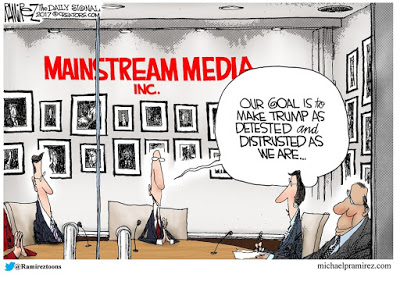 President Trump took his case to the American people today and the corrupt, progressive, elite, smug, nasty, deceptive, hostile, mainstream media was forced to be his punk, and broadcast it live. Officially paid for by Trump 2020 as a campaign rally, the President took his case to the public, explaining what he’s been doing and outlining his successful first month in office.
Usually, in less adversarial situations, the press feels the Obama tingle running up their legs. That’s not true now and rather than letting the press offer up outright lie-after-lie, the President decided to do it his way.
It was a good day to pop some popcorn and watch the event. Note if you will the difference in demeanor between the Trump supporters and the ‘nasty’ protestors. I’ve seen this at Trump rallies that I attended – similar to Tea Party rallies. People are decent, polite, respectful, and pick up after themselves on the conservative side. The filthy, smug, elitists on the other side are an interesting contrast.