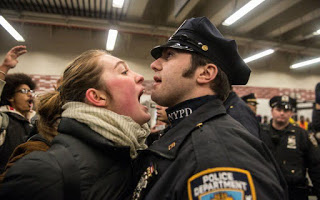 In a more reasonable age, the officer would simply push the obnoxious citizen back – or if the citizen grabbed his badge, he’d rotate the wrist, snap the arm at the elbow, handcuff the broken arm, to the good one behind the citizen’s back and pass the person to the officers standing behind him, who would transport the suspect to jail and then treat them for the broken arm.
Aftermath: The elbow/bone would never heal correctly, the suspect would do three months picking peas or cotton once the injury healed somewhat and then they’d be released having learned a valuable civics lesson that their parents failed to teach them.
Then again, I’m a dinosaur – and my perspective on how people are expected to behave is antiquated. I come from a time when men were expected to remain men for the duration of their lives as were women, not transition back and forth as the mood took them. (we called those people “disturbed”)
I come from an age when the ILLEGAL in “illegal alien” meant that they committed a crime by violating the laws of the United States of America. How antiquated is THAT? Today, California rewards illegal behavior with a drivers’s license, full medical benefits, housing allowances and welfare payments — in the hope that the taxpayer dollars that they spend will build a dependent voting block which will reliably vote Democrat. (So far, so good.)

President Trump took the media to school in a news conference that the media complained, served to delegitimize them (and worse still, made their advertisers take notice) and what did they do? They kept running a story that even they had to admit was completely fake in that the Trump Administration planned to mobilize 10,000 National Guard to round up illegal aliens. The corrupt, smug, progressive, elite mainstream media has Tourette syndrome and can not stop doing what it is that they do.

Moreover, they are still amazed that the American people voted for Donald Trump after their concerted effort to push Hillary Clinton’s anemic bid for the presidency. Even now, all you have to do is tune in or read and they will explain how the American people weren’t listening to their vindictive mutterings closely enough.

But the Stock Market has never been higher than now – not ever. Maybe those people know something that the elite, smug, corrupt, progressive mainstream media is missing? Intel is building a new plant near Phoenix with 10,000 new well paying jobs. Arizona, very hard hit by the Obamacare disaster and an economy that has struggled since the economic collapse in 2008-9, is paying attention. The same is true of the Detroit auto workers, and other places around the country. The smug, bloated, elite mainstream media’s strident screams over the air waves don’t Trump jobs…